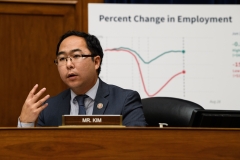 (CNS News) -- When asked whether the legal age to drink alcohol, 21, should be lowered to 18, which is the legal age to purchase a rifle, such as the AR-15, Rep. Andy Kim (D-N. J.) said Congress is focused on keeping “dangerous weapons out of the hands of those” who would do harm by raising “the age for [people] to buy weapons like the AR-15.”

At the U.S. Capitol on June 8, CNS News.com asked the representative, “Under federal law, a person can buy a rifle at 18, but can’t buy alcohol until they’re 21. Should the drinking age be lowered to 18?”

Kim said, “No, no. Right now we’re just focused on trying to make sure that we’re trying to keep these dangerous weapons out of the hands of those that are trying to do harm. So that’s what we’re going to focus in on. So it’s not about dropping the drinking age, it’s about seeing what we can do to raise up the age for them to buy weapons like the AR-15.”

Both the Uvalde, Texas shooter and the Buffalo, N.Y. shooter were able to legally purchase the rifles they used. However, police had ordered the Buffalo shooter suspect to undergo a psychiatric evaluation months before he allegedly committed a mass murder. This ordered evaluation did not appear in his background check.

On June 8, the House of Representatives voted to pass the “Protecting Our Kids Act,” which would raise the federal minimum age to buy rifles and shotguns to 21, barring a few exceptions, and also regulate gun trafficking, “ghost guns,” gun storage, and bump stocks. The legislation is expected to run into hurdles in the U.S. Senate.