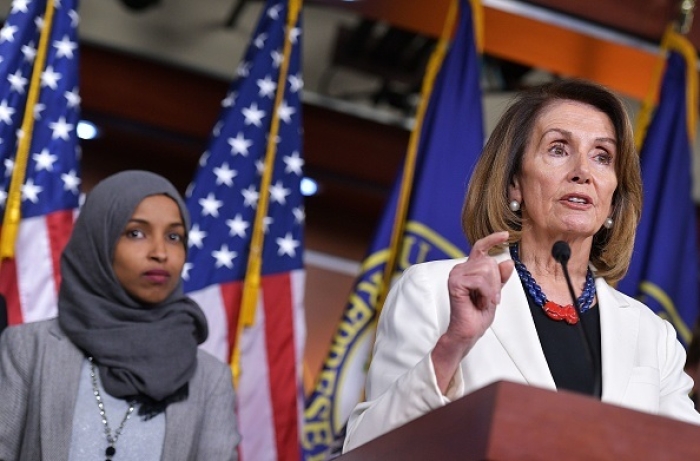 Ilhan Omar, one of the first two Muslim women to be elected to Congress, with Democratic Leader Nancy Pelosi after the 2018 midterm election. (Photo by Mandel Ngan / AFP via Getty Images)

Omar’s allies in the Congressional Progressive Caucus and the Council on American-Islamic Relations (CAIR) stepped in, similarly accusing McCarthy of racism, with CAIR contrasting his position on Omar to his pledge to restore Rep. Marjorie Taylor Greene (R-Ga.) to committee assignments.

McCarthy drew cheers when he told the Republican Jewish Committee at the weekend, in the context of comments about antisemitism, that as speaker he would remove Omar from the committee. Omar has attracted criticism, including from some fellow Democrats, for past comments viewed as antisemitic.

McCarthy repeated the pledge in an appearance on Fox News’ “Sunday Morning Futures,” saying he would strip Omar of her committee assignment and remove Reps. Adam Schiff (D-Calif.) and Eric Swalwell (D-Calif.) from the House Intelligence Committee.

In a statement on Monday, Omar said that from the moment she was elected in 2018 the Republican Party had used “fear, xenophobia, Islamophobia and racism” to target her in Congress and through campaign ads.

“What it does is gin up fear and hate against Somali-Americans and anyone who shares my identity, and further divide us along racial and ethnic lines,” said Omar, who was born in Somalia and moved to the United States as a refugee in 1995.

Rep. Pramila Jayapal (D-Wash.), chairperson of the Congressional Progressive Caucus – of which Omar serves as whip – tweeted that Omar was “a dedicated Congresswoman and a powerful member” of the caucus.

“But since the moment she arrived in Washington, the Republican Party has weaponized xenophobia and racism to undermine her voice,” Jayapal said. “It is clear that Kevin McCarthy did not hear the American people when they unequivocally rejected MAGA extremism and hatred in the midterms. It’s time to turn down the temperature.”

CAIR’s director of government affairs Robert McCaw called on Democratic and Republican lawmakers “to reject Mr. McCarthy’s unjustified and hypocritical threat,” and warned that McCarthy would “alienate” Muslim voters “in the light of the surprising gains that Republican candidates made” among them in the midterms.

“Attacking Rep. Omar while embracing Rep. Greene would smack of hypocrisy, racism and Islamophobia,” charged McCaw, whose organization describes itself as the nation’s biggest Muslim civil rights and advocacy group.

The House in February last year voted to remove Greene from both the Education and Labor and the Budget committees, after she was accused of making racist remarks and embracing conspiracy theories.

McCarthy said at the time that Greene’s “past comments and posts as a private citizen do not represent the values of my party. As a Republican, as a conservative, as an American, I condemn those views unequivocally.”

But he also pointed out that House Speaker Nancy Pelosi had not stripped committee memberships from House Democrats who became embroiled in controversy – an apparent reference to Omar.

“If that’s the new standard,” McCarthy said of the move to eject Greene from her committees, “we have a long list.” 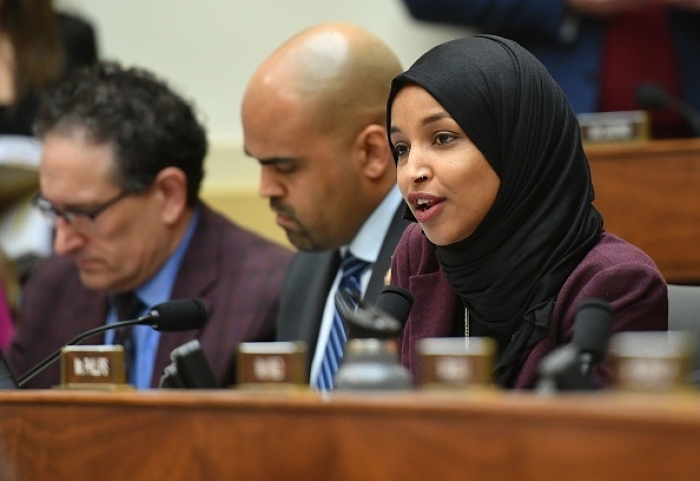 Weeks after taking her seat as a freshman in early 2019, Omar caused dismay in the House after implying some U.S. politicians were paid to be pro-Israel and have “allegiance to a foreign country.”

Senior Democrats were among those angered by comments aired by Omar, and party leaders later tried to calm the tensions by proposing a resolution condemning antisemitism.

Ultimately the House passed a resolution that did not name Omar, and also cited wideranging expressions of prejudice, rather than antisemitism alone – Islamophobia as well as bigotry directed at “African Americans, Latinos, Native Americans, Asian Americans and Pacific Islanders and other people of color, Jews, Muslims, Hindus, Sikhs, the LGBTQ community, immigrants, and others.”

Earlier, Republican leaders were critical when the Democratic caucus appointed Omar to the House Foreign Affairs Committee, with McCarthy questioning the decision to promote “a pro-BDS Democrat to a key committee that deals with the State of Israel.”

Omar is a supporter of the anti-Israel boycott, divestment and sanctions (BDS) movement, which critics argue is inherently antisemitic, in part since it targets only the Jewish state and none of the many other nations around the world grappling with territorial disputes.