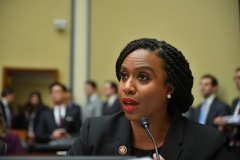 (CNSNews.com) – Rep. Ayanna Pressley (D-Mass.) called Monday for former Vice President Joe Biden and his presidential campaign to give a response to Tara Reade’s allegations of sexual assault “that models the empathy, diligence, and acknowledgement of broken systems that this conversation demands.”

In a considered online post Pressley, herself a survivor of sexual assault, implicitly acknowledged the weight of her intervention, but said she was “not new to being offered false choices in politics.”

“We are in the throes of an election of the greatest consequence–one that will determine if core rights and tenets of democracy survive in this nation. The stakes cannot be overstated,” she wrote.

“But I have no patience for any person who tells me that is a reason to lower my voice. I reject the false choice that my party and our nominee can’t address the allegations at hand and defeat the occupant of the White House.”

Pressley, 46, is a member of the so-called “Squad” of freshman Democratic congresswomen. The first black woman elected to Congress from Massachusetts, she ran unopposed in November 2018 after defeating a ten-term incumbent in a Democratic primary two months earlier.

Although often associated with Reps. Alexandria Ocasio-Cortez (D-N.Y.), Rashida Tlaib (D-Mich.), and Ilhan Omar (Minn.), Pressley split with them during the Democratic presidential primary, endorsing fellow Bay Stater Sen. Elizabeth Warren for the nomination while they campaigned for Sen. Bernie Sanders of Vermont.

In her article Monday, Pressley said much of the work of those who advocate for justice for survivors of abuse doesn’t take place in public.

“But when the experience does play out in public – as it has with Joe Biden and Tara Reade – we are called to examine an urgent and visceral question: what does an authentic path towards healing and justice look like for survivors in America?”

I speak from personal experience when I say the path often isn’t linear; for many, taking even the first step takes years. What I know to be true in this moment is that we do not have a public model of how to get this right.

When deep personal trauma is viewed through the skewed kaleidoscope of public opinion – pundits, commentators, twitter bots – it is difficult to articulate what getting to the other side looks like. How can healing occur when wounds are reopened daily, and how can justice be served when our legal system is broken and our culture deeply flawed?

Our assumptions and our starting points for these conversations have to change, and the allegations against Joe Biden are no exception.

Listening to the stories of those who step forward is the baseline. We say “believe survivors” because, for nearly all of history, the experiences of survivors have been dismissed and derided by a society steeped in misogyny and hatred. We advocate that we begin with assumptions of credibility and move to due process and reconciliation.

Pressley made clear she does not believe much of the Republican interest in the issue is motivated by the yearning for survivor justice, but instead by a desire to undermine the presumptive Democratic nominee.

“It is a shameless and brutal exercise that does nothing but irrevocably harm the very people such opportunists claim to be standing up for,” she charged.

“But for those who do, actually, seek to reframe our conversations and work in pursuit of justice, we are required to raise our hands and our voices. It will take discipline and courage, but survivors and marginalized people from all walks of life are watching, wondering if – this time – the conversation might actually change,” she wrote.

“So I’m here to ask the Biden campaign and the nominee to give a response that models the empathy, diligence, and acknowledgement of broken systems that this conversation demands.”

“I’m asking for true partnership with survivors and advocates, and for policy commitments that get us closer as a nation to reconciling our history of structural violence and oppression,” Pressley concluded. “There are survivors in every corner of this nation who can tell you what a more just America would look like. I, for one, will be listening.”

On Twitter, two of Pressley’s “Squad” mates posted messages of support on Monday evening, with quotes from the article, which Tlaib called a “must read.”

“This OpEd from @AyannaPressley is powerful, her voice/advocacy offer a path for survivor justice and reconciliation,” tweeted Omar. “And I am here for it!”

The Trump campaign at the weekend accused Biden and Democratic elected officials of a “double standard,” contrasting the episode with the way they dealt with sexual assault claims against Justice Brett Kavanaugh during his Supreme Court confirmation hearings in 2018.