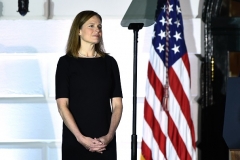 Judge Amy Coney Barrett is sworn in as a Supreme Court Associate Justice during a ceremony at the White House October 26, 2020. (Photo by BRENDAN SMIALOWSKI/AFP via Getty Images)

(CNSNews.com) – “Generations yet unborn will suffer the consequences” of Amy Coney Barrett’s elevation to the Supreme Court, Senate Minority Leader Chuck Schumer said on the Senate floor, shortly before a majority voted on Monday to confirm the pro-life, conservative judge onto the bench.

Schumer was not likely thinking of unborn babies in the womb; his next sentence began with an allusion to climate change. But the same sentence also included a reference to abortion, as he lamented what he described as “reactionary state legislatures curtail[ing] a woman’s right to choose.”

Now-Justice Barrett said at her swearing-in ceremony on Monday night that she would carry out her duties “independently of both the political branches and of my own preferences,” saying that “a judge declares independence, not only from Congress and the president, but also from the private beliefs that might otherwise move her.”

But Schumer in his remarks said Barrett on the bench “very well might” give the Supreme Court a majority to restrict Roe. v. Wade, the court’s 1973 decision that legalized abortion.

“Republicans would never dare to attempt to repeal Roe v. Wade in Congress, so they pass onerous laws in state legislatures, that they control, to drive that right to point of near extinction, and then provoke the Supreme Court to review Roe v. Wade,” he said.

“The far-right has never held a majority on the Court to limit Roe v. Wade or Griswold [v. Connecticut]” – the 1965 ruling that established the legal foundation leading to Roe v. Wage eight years later.

“But if Judge Barrett becomes Justice Barrett – it very well might.”

“Generations yet unborn will suffer the consequences of this nomination,” he said. “As the globe gets warmer, as workers continue to fall behind, as unlimited, dark money floods our politics, as reactionary state legislatures curtail a woman’s right to choose, gerrymander districts, and limit the rights of minorities to vote, my deepest, greatest, and most abiding sadness tonight is for the American people, and what this nomination to the Supreme Court will mean for their lives, their freedoms, their fundamental rights.”

With Schumer as minority leader, all but three Senate Democrats in February last year voted to block legislation requiring a baby born alive during a botched abortion to receive the same level of care given to any other newborn.

“The bill is solely meant to intimidate doctors and restrict patients’ access to care and has nothing, nothing, nothing to do with protecting children,” Schumer said during that debate.

Exactly a year later, Senate Democrats again voted to block the Born-Alive Abortion Survivors Protection Act. As they did, Schumer once again derided the bill, calling it “anti-choice, anti-women, anti-family,” and accusing the Republican leadership of bringing it to the floor “to pander to the hard right.”

During her confirmation hearings, Barrett was questioned about her pro-life views. She declined when pressed on particular issues to say how she would rule as a justice on matters that may come before her on the court.

In an op-ed earlier this month, Students for Life of America president Kristan Hawkins pointed out that at least three Supreme Court justices, Sonia Sotomayor, Elena Kagan and the late Ruth Bader Ginsburg, “made no secret of their views on abortion before their nominations and confirmations,” and provided details in each case.

After Monday’s vote to confirm President Trump’s nominee, Hawkins said that Barrett “inspires the pro-life generation with her story of rising to the top of her profession while embracing home and family.”

“The abortion mentality that forces a civil war into women’s lives between their careers and relationships must be confronted with the stories of women who embraced both, and Judge Amy continues to do just that,” she said. “Women don’t need abortion to succeed.”