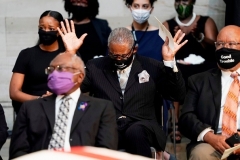 (CNSNews.com) – Rep. Gregory Meeks (D-.N.Y.) was elected Thursday to chair the House Foreign Affairs Committee – the first African American to hold the post – in a disappointment for progressive activists pushing for a rival candidate viewed, among other things, as being more sympathetic towards the Palestinian cause.

Meeks will succeed Rep. Eliot Engel, the establishment-supported 16-term veteran who was beaten in a shock New York primary contest last June by Jamaal Bowman, a Justice Democrats-backed progressive widely seen as part of a growing left-wing “squad” in the next Congress.  Engel was disliked by progressives for his pro-Israel stance and his opposition to the Obama-era Iran nuclear deal.

The caucus-wide secret ballot vote handed Meeks victory over Rep. Joaquin Castro (D-Texas) by 148 votes to 78. Earlier a third candidate, Rep. Brad Sherman (D-Calif.), withdrew from the race after coming third in a vote by the party’s steering and policy committee.

Meeks was endorsed in his House race this year by the pro-Israel Democratic Majority For Israel PAC (as was Sherman), and after Thursday’s vote DMFI noted Meeks’ “strong support for Israel, his opposition to additional conditions on U.S. security assistance to Israel, his support for a two-state solution, his commitment to preventing Iran from obtaining a nuclear weapon, and his plan to restore America’s standing around the world.”

More than 50 progressive groups had endorsed Castro for the chairmanship, saying they were eager to work with him “to build a more restrained and progressive foreign policy.”

In their letter of support, the left-wing groups praised Castro for stances on ending U.S. support for the Saudi war in Yemen, supporting war powers reform legislation, promoting “reproductive rights (in the U.S. and abroad),” and putting “addressing the climate crisis at the forefront” of the committee’s agenda.

“We applaud Representative Castro’s recent commitment to include Palestinian voices in the formulation of policy impacting their lives and his specific condemnation of the Trump administration backing Israeli settlements and its overt and tacit approval of the annexation of the West Bank,” the groups said.

“We hope to build with Rep. Castro towards a U.S. foreign policy that centers the perspectives and solutions of communities who have experienced harm as a result of U.S. policy, and that tackles the rise in right-wing authoritarianism around the world, which disproportionately impacts women, girls, the LGBTQ+ community, and communities of color.”

Progressive foreign policy activist Yasmine Taeb told a Justice Democrats podcast that although Meeks had “for the most part” been supportive of many issues important to the progressive groups – like returning to the Iran deal – “the issue that many progressives have with Rep. Meeks is, you know, his support for various trade deals, and not prioritizing workers’ rights.”

Taeb, who was speaking shortly before Thursday’s vote, said it would be “great” if the progressive-backed Castro was handed the committee gavel after the previous chairman had been unseated by a progressive insurgent.

But even if he lost, she said Meeks would be better that the “hawkish” Sherman, whose policies “are more in line with the outgoing chair.”

‘There are going to be costs’

Duss said Engel “was a total hawk” who on a lot of issues that progressives care about, “like the Middle East, like Iran, like Israel-Palestine, was very much to the right of the Democratic Party.”

Omar, who caused a ruckus in the Democratic caucus early on with provocative comments about Jews, became a member of the House Foreign Affairs Committee, whose vocally pro-Israel chairman had been highly critical of her remarks.

Engel later championed an anti-BDS measure which passed with a large bipartisan majority, although Omar, Tlaib, and fellow “Squad” member Rep. Alexandria Ocasio-Cortez (D-N.Y.) were among the 17 “no” votes.

(Castro was not among the 175 Democrats who co-sponsored the anti-BDS resolution, although he did vote in favor. Earlier, he co-sponsored a bill authored by Omar, reaffirming the right to boycott “in pursuit of civil and human rights at home and abroad.” That bill has not progressed.)

Castro in a statement Thursday congratulated Meeks, and said he looked forward to working with the new chairman, “particularly on our common goals such as promoting diversity at the U.S. State Department and rejoining the Iran nuclear deal.”

“Rep. Meeks has extensive foreign policy knowledge and experience, and we have worked together on many important issues on the committee,” he said. “I look forward to working with him closely and continuing the committee’s tradition of bipartisanship on behalf of the American people.”