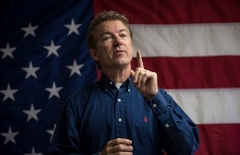 (CNSNews.com) – Sen. Rand Paul (R-Ky.) on Tuesday accused “hyperpartisan Democrats” of preparing to drag the U.S. “into the gutter of rancor and vitriol” by putting former President Trump, a private citizen, on trial.

In an indication of the uphill battle Democrats face in securing a conviction, 45 Republicans voted in support of Paul’s bid to declare next month’s impeachment trial unconstitutional.

The Democrats would need 17 Republican senators’ support to reach the two-thirds majority required to secure a conviction in the trial, which is set to proceed on February 9.

Ahead of the vote on his point of order, Paul argued that it would be unconstitutional for the Senate to hold an impeachment trial for a private citizen.

He read article two, section four of the U.S. Constitution: “The President, Vice President and all civil Officers of the United States, shall be removed from Office on Impeachment for, and Conviction of, Treason, Bribery, or other high Crimes and Misdemeanors.”

Paul also read out a portion of article one, section three of the Constitution: “When the President of the United States is tried, the Chief Justice shall preside.”

“Therefore I make a point of order that this proceeding, which would try a private citizen and not a president, vice president or civil officer, violates the Constitution and is not in order.”

Since Chief Justice John Roberts has declined to preside over a second Trump impeachment trial, Leahy as Senate president pro tempore will do so. Leahy supported Trump’s impeachment this month, although he says that as presiding officer in the trial he “will not waver from my constitutional and sworn obligations to administer the trial with fairness, in accordance with the Constitution and the laws.”

“The history and precedent is clear. The Senate has the power to try former officials and the reasons for that basic common sense,” he said. “It makes no sense whatsoever than a president or any official could commit a heinous crime against our country, and then defeat Congress’ impeachment powers, and avoid a vote on disqualification, by simply resigning. Or by waiting to commit that offense, until their last few weeks in office.”

“Former President Trump committed, in the view of many, including myself, the gravest offense ever committed by a president of the United States,” Schumer said. “The Senate will conduct a trial of the former president, and senators will render judgments on his conduct.”

‘The antithesis of unity’

In an earlier floor speech, Paul slammed Democrats, saying that while they “claim to want to unify the country,” impeaching the former president “is the antithesis of unity.”

“Democrats brazenly appointing a pro-impeachment Democrat to preside over the trial is not fair or impartial, and hardly encourages any kind of unity in our country.”

“Hyperpartisan Democrats are about to drag our great country down into the gutter of rancor and vitriol, the likes of which has never been seen in our nation’s history,” he said. “Instead of doing the nation’s work with their new majorities in the House, the Senate, and the executive branch, Democrats are wasting the nation’s time on a partisan vendetta against a man no longer in office.”

Sen. Thom Tillis (R-N.C.) after the vote expressed concern that the Senate could use its power of impeachment as “a political weapon, especially if it is primarily used to disqualify an individual citizen from running for public office.”

“My Democratic colleagues would have rightfully objected to Republicans – when they controlled Congress – using the impeachment power to disqualify former Secretary of State Hillary Clinton from running for president in 2016 because of her email controversy,” he said.

The five GOP senators who voted to kill Paul’s point of order motion are all known critics of Trump.

In Trump’s first Senate impeachment trial early last year, Romney was the lone Republican to vote to find the president guilty of one of the two charges he faced – abuse of power.

Earlier this month, Murkowski and Toomey both called on Trump to resign, following the January 6 riot at the U.S. Capitol. (Toomey announced last October he plans to retire at the end of his current term in 2022.)

Collins, a longstanding critic of Trump who said she did not vote for him in 2016, accused him of provoking his supporters to storm the Capitol.

Sasse, also a vocal Trump critic, became the first Republican to say this month he would “definitely consider” articles of impeachment should the House move ahead with that process.

The House on January 13 passed a resolution impeaching Trump for “incitement to insurrection,” by a 232-197 vote.