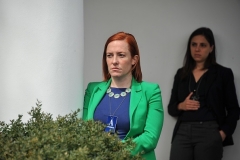 Jen Psaki, seen here during her stint as White House communications director in 2015, has been named as White House press secretary in a Biden administration. (Photo by Nicholas Kamm/AFP via Getty Images)

(CNSNews.com) – The Biden-Harris transition team on Sunday announced its picks for the White House communications team – a group of liberal, Democrat and Obama-era operatives, all of whom are women.

“I am proud to announce today the first senior White House communications team comprised entirely of women,” said former Vice President Joe Biden. “These qualified, experienced communicators bring diverse perspectives to their work and a shared commitment to building this country back better.”

The most familiar face among the seven women named will also be the public face of the Biden White House:  Jen Psaki, who served as spokeswoman for the John Kerry State Department from 2013-2015, and communications director (2015-2017), deputy communications director (2009-2011), and deputy press secretary (2009) for the Obama White House, has been named as Kayleigh McEnany’s successor as White House press secretary. Previous holders of the post in the Trump White House were Stephanie Grisham, Sarah Sanders, and Sean Spicer.

Psaki was a spokesperson for the Democratic Congressional Campaign Committee in 2006, and deputy press secretary for Kerry’s unsuccessful presidential campaign in 2004.  (Kerry will himself be returning to the federal government next year, as the first-ever National Security Council-level official focused on climate change.)

As White House communications director, the transition team has named Kate Bedingfield, deputy manager for the Biden-Harris campaign. She will assume a post that is currently vacant, but which has been filled during the Trump administration by Spicer, Grisham, Hope Hicks – and, for 11 chaotic days in the summer of 2017, by Anthony Scaramucci.

Past positions held by Bedingfield include those of communication director for Vice President Biden and deputy media affairs director and director of response in the Obama White House, communications director to Sen. Jeanne Shaheen (D-N.H.), and spokeswoman for Sen. John Edwards’ unsuccessful presidential campaign in 2008.

In line to serve as Bedingfield’s deputy will be Pili Tobar, a Guatemalan-American who was “communications director for coalitions” in the Biden-Harris campaign, and whose previous posts have included Hispanic media director for Senate Minority Leader Chuck Schumer, and deputy director of America’s Voice, a liberal immigration advocacy group whose goals include “direct, fair, and inclusive road to citizenship for immigrants in the U.S. without papers.”

Psaki’s deputy in the press office will be Karine Jean-Pierre, a chief public affairs officer for the liberal group MoveOn.org and MSNBC and NBS political analyst. Jean-Pierre, who was born to Haitian immigrants in Martinique – an overseas region of France in the Caribbean – and raised in New York, also worked for Obama’s presidential campaigns in 2008 and 2012, and in 2014 was campaign manager for the ACLU’s “Reproductive Freedom Initiative.”

The LGBT publication The Advocate on Sunday headlined the fact that Jean-Pierre is “a black lesbian.”

Harris described those selected as an “experienced, talented, and barrier-shattering team” and Biden’s designated chief of staff, Ron Klain, said they “embody Joe Biden’s commitment to a diverse administration where the voices of all Americans are represented.”

Psaki tweeted of the other six women named: “This is a team of some of the most talented, battle-tested communicators out there … who are also all women, most diverse team in history and also 6 Moms of young kids.”

A Washington Post report on the selection stated, “It is the first time all of the top aides tasked with speaking on behalf of an administration and shaping its message will be female.”

Reacting to that take, White House deputy press secretary Judd Deere tweeted, “Since I arrived at the Trump White House a woman has always been my boss. First it was Hope Hicks, [director of strategic communications] Mercedes Schlapp, and Sarah Sanders. Then it was Stephanie Grisham. And of course currently it’s Kayleigh McEnany and [director of strategic communications] Alyssa Farah. I guess the media forgot.”

Rounding out the team named on Sunday are three women who will work with Harris and Dr. Jill Biden.

Harris’ chief spokeswoman will be Symone Sanders, another adviser to the Biden campaign, and a former CNN political commentator and press secretary for Sen. Bernie Sanders’ 2016 presidential campaign.

The post of communications director for the first lady will be held by another Biden campaign adviser, Elizabeth Alexander, a former federal prosecutor who served as spokeswoman for Biden when he was vice president, and in the Senate prior to that. Previous posts included communications roles in the offices of Schumer, Rep. Adam Schiff (D-Calif.) and then-Democratic National Committee chairman Terry McAuliffe.