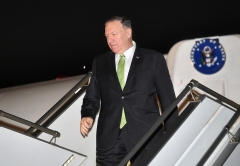 Secretary of State Mike Pompeo plans to deliver a speech in Atlanta, Georgia on Wednesday. (Photo by Mandel Ngan/AFP via Getty Images)

(CNSNews.com) – Secretary of State Mike Pompeo swatted away criticism Monday over his plans to deliver a speech this week in Georgia – where crucial Senate runoff elections are looming – suggesting that no-one had raised flags when his predecessors had domestic engagements during their tenures at the State Department.

Pompeo, already under scrutiny for activity deemed inappropriately political during the recent election campaign, is due to speak at the Georgia Institute of Technology in Atlanta on Wednesday, on “the China challenge to U.S. national security and academic freedom.”

“It’s another foray into domestic politics for the top U.S. diplomat,” declared ABC News, predicting that the speech on the China threat would be “politically tinged.”

Interviewed on “The Guy Benson Show” on Monday evening, Pompeo laughed off the criticism.

“When Mike Pompeo wants to travel to Georgia, somehow that’s incomprehensible, that foreign policy could matter to an enormously capable research institution like Georgia Tech – where I’m going to go speak about that very set of issues, the fact that in America’s research educational institutions today, the Chinese Communist Party is aiming to lobby, to influence, and to steal.”

The Trump administration has been ratcheting up the pressure on Beijing through the course of this year, imposing sanctions and other restrictions on officials and entities in an purposeful campaign that has continued beyond last month’s election.

On Friday, Pompeo announced restrictions on visas for members of the Chinese Communist Party (CCP) and the party’s United Front Work Department, which he said “funds and supports overseas organizations to spread propaganda and coerces and bullies those who would oppose Beijing’s policies.”

On the same day, he terminated five “cultural exchange” programs with China, saying they are funded and operated by Beijing “as soft power propaganda tools.”

Chinese foreign ministry spokeswoman Hua Chunying on Monday slammed what she called “vile attacks against China and further restrictions on the people-to-people exchanges between China and the United States.” She added that “anti-China forces in the U.S., with their entrenched Cold War mindset, have been trying hard to provoke ideological rivalry between the two countries, with the purpose to sabotage China-U.S. relations,” but that they would not succeed.

Pompeo told Benson that at Georgia Tech, he plans to talk about the CCP’s infiltration at U.S. universities, “the things those schools ought to do, and indeed must do, to protect not only their students but their data. And I want to talk about how China is going about this, why it impacts American national security, and how the Trump administration is pushing back against that.”

Pompeo received flak over the summer for delivering a speech, recorded while on an official visit to Jerusalem, to the Republican National Convention.

House Democrats requested a probe into whether the speech violated the 1939 Hatch Act, which restricts federal employees from engaging in political activity while on duty, and the Office of Special Counsel reportedly opened an investigation.

A non-exhaustive review of travel by Pompeo’s two Democratic predecessors at the State Department finds that Kerry delivered occasional speeches in Massachusetts (including one at Harvard in 2015 and another at MIT in early 2017) and visited a wind technology testing center in Boston with his British counterpart in 2014.

Clinton took part in numerous events in New York City while serving as secretary of state from Jan. 21, 2009 to Feb. 1, 2013 – not including those relating to the United Nations – delivering speeches at policy institutions, schools, galas, benefits, award dinners, and other events.

Kerry and Clinton did represent Massachusetts and New York respectively during their U.S. Senate careers.