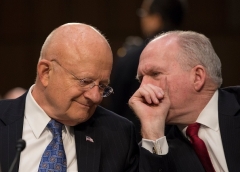 (CNSNews.com) –  More than 50 former intelligence officials, including some harsh public critics of President Trump, have signed a statement expressing their view that the Hunter Biden email revelations published by the New York Post and casting Democratic presidential nominee Joe Biden in a dim light have “all the classic earmarks of a Russian information operation.”

The statement, a copy of which was published by Politico, came shortly after the current Director of National Intelligence John Ratcliffe stated unequivocally that the intelligence community (IC) does not believe the emails, allegedly obtained from a laptop belonging to Hunter Biden, were “part of some Russian disinformation campaign.”

“Let me be clear,” Ratcliffe told Fox News’ Maria Bartiromo, “[The] intelligence community doesn’t believe that, because there’s no intelligence that supports that. And we have shared no intelligence with [House Intelligence Committee] Chairman Schiff or any other member of Congress that Hunter Biden’s laptop is part of some Russian disinformation campaign. It’s simply not true.”

The signatories of the statement stressed that they do not know if the emails provided to the New York Post “are genuine or not and that we do not have evidence of Russian involvement – just that our experience makes us deeply suspicious that the Russian government played a significant role in this case.”

“Such an operation would be consistent with Russian objectives, as outlined publicly and recently by the Intelligence Community, to create political chaos in the United States and to deepen political divisions here but also to undermine the candidacy of former Vice President Biden and thereby help the candidacy of President Trump,” it reads.

“For the Russians at this point, with Trump down in the polls, there is incentive for Moscow to pull out the stops to do anything possible to help Trump win and/or to weaken Biden should he win. A ‘laptop op’ fits the bill, as the publication of the emails are clearly designed to discredit Biden.”

The New York Post stories drew attention to alleged attempts by Hunter Biden to benefit from his father’s position.

They were based on emails purportedly from an unclaimed laptop left at a computer repair store in Delaware. They were handed to the newspaper by Trump’s personal attorney, former New York Mayor Rudi Giuliani, who has made no secret of his efforts to uncover information that will help Trump’s campaign.

The Biden campaign has said there is no record of a scheduled meeting between Joe Biden and a senior advisor to the Ukrainian natural gas company Burisma – a central claim in the initial story – but it has not challenged the authenticity of the emails. On the contrary, Biden campaign surrogate Jenna Arnold told Fox News, “I don’t think anybody is saying they are inauthentic.”

Biden himself has largely sidestepped queries on the issue, although he did call it “another smear campaign” – before slamming the reporter who asked the question.

The list of signatories to the statement is topped by former senior intelligence figures who have made clear their opposition to Trump.

Alluding to this, Richard Grenell, former acting Director of National Intelligence and a Trump ally, tweeted Monday, “This is a list of people who have politicized Intelligence for political gain. DNI Ratcliffe has said there is no evidence for their claim, nevertheless they persisted.”

--John Brennan, CIA director and Homeland Security Advisor in the Obama administration. Brennan has become an outspoken social media critic of Trump, who revoked his security clearance in 2018. He is tweeting actively in support of Biden’s election.

--James Clapper, Director of National Intelligence in the Obama administration. He has questioned Trump’s fitness to be president, called his access to the nuclear codes “pretty damn scary” and described the claims of collusion between the Trump campaign and Russia worse than Watergate. Clapper endorsed Biden for president last week.

--Michael Hayden, former CIA and National Security Agency director in the Clinton and Bush administrations. Last week he made his political views clear in a video clip posted online: “Biden is a good man, Donald Trump is not.” Hayden’s 2018 book, The Assault on Intelligence: American National Security in an Age of Lies, is deeply critical of Trump.

--Michael Morell, CIA deputy and acting director in the Obama administration. Morell endorsed Hillary Clinton for president in 2016, writing in a New York Times op-ed, “Donald J. Trump is not only unqualified for the job, but he may well pose a threat to our national security.”

--Leon Panetta, CIA director and Defense Secretary in the Obama administration. Panetta spoke at the 2016 Democratic National Convention in support of Hillary Clinton, characterizing Trump as a Russian dupe and unfit to be president. Over the summer Panetta told CNN Trump had “gone AWOL” during the coronavirus pandemic

--John McLaughlin, CIA deputy and acting director in the Clinton and Bush administrations. McLaughlin has been critical of Trump, telling NPR in March last year that Trump’s opponents should “focus on his performance as president and on what he’s revealed himself to be. I mean, he’s still the man who questioned Barack Obama’s birthplace, who failed to deliver on health care, who falsely promised that Mexico would pay for a wall, insults allies and so forth. And the Russians appeared to favor him in the last election.”

When asked by CBS News’ Margaret Brennan a year ago about Trump’s concerns about “deep state” in relation to the impeachment inquiry, McLaughlin responded, “well, thank God for the deep state.”