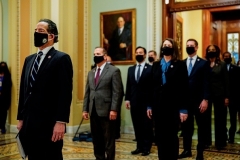 (CNSNews.com) – An impeachment trial for former President Trump “has to happen,” despite the impact that could have on moving his agenda forward, President Joe Biden told a CNN reporter at the White House on Monday night.

Biden, who came into office aiming for “unity,” made the reported comments on the same evening nine House Democratic impeachment managers marched their sole impeachment charge against Trump – “incitement of insurrection” – over to the U.S. Senate.

And in an interview with MSNBC's Rachel Maddow on Monday, Senate Democrat leader Chuck Schumer said Biden "feels an urgent need" for the impeachment trial.

“Was President Biden involved in advising you at all, what he wanted in terms of the timing of the trial?” Maddow asked Schumer.

“Yeah, we talked to the president. He feels an urgent need. He feels there has to be the trial like we do,” Schumer replied.

CNN chief White House correspondent Kaitlan Collins told host Erin Burnett that she asked Biden as he walked from the Oval Office to the residence for his view on the trial, given concerns about what it could mean for his agenda, and that he had replied, “I think it has to happen.”

Collins said Biden thought it unlikely that 17 Republican senators would vote to convict Trump. The Senate is divided 50-50, and a two-thirds majority vote is required for a conviction.

“But he did say that he believes this trial is something that has to happen,” she said. “And so that’s how he’s viewing it, regardless of the effect that it very well could have on his agenda.”

In the Senate, lead impeachment manager Rep. Jamie Raskin (D-Md.) read out the impeachment resolution which the House passed in a 232-197 vote on January 13.

After laying out the allegations relating to Trump’s response to the 2020 presidential election, and the Capitol riot on January 6, the measure concludes:

Therefore, Donald John Trump, by such conduct, has demonstrated that he will remain a threat to national security, democracy, and the Constitution if allowed to remain in office, and has acted in a manner grossly incompatible with self-governance and the rule of law. Donald John Trump thus warrants impeachment and trial, removal from office, and disqualification to hold and enjoy any office of honor, trust, or profit under the United States.

At the daily White House press briefing on Monday, a reporter asked White House press secretary Jen Psaki, “If the whole point of impeaching somebody is basically to get rid of them, and Trump is already gone, would President Biden support maybe the Senate censuring him just so that lawmakers can move on with the people’s business?”

“I really appreciate your creative way of asking this question, which has come up a few times in here,” Psaki replied. “The president is – was in the Senate for 36 years, as you all know. He is no longer in the Senate, and he will leave it up to members of the Senate – Democrats and Republicans – to determine how they will hold the former president accountable.”

Arguments in the trial are expected to begin the week of February 8, with Sen. Patrick Leahy (D-Vt.), Senate president pro tempore, presiding.