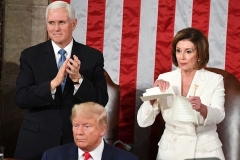 House Speaker Nancy Pelosi rips up her copy of President Trump's speech as he concludes his State of the Union address on February 4, 2020. (Photo by Mandel Ngan/AFP via Getty Images)

(CNSNews.com) – Democrat presidential nominee Joe Biden suggested on Thursday night that President Trump had said nothing about the emerging coronavirus outbreak during his State of the Union address early this year.

During a CNN town hall in Pennsylvania, Biden contrasted Trump’s response to the crisis to his own, implying that he had been way out ahead of the president.

“He knew about it, he knew the detail of it, he knew it in clear terms,” he said of Trump.

“Imagine had he at the State of the Union stood up and said – when back in January I wrote an article for USA Today saying we’ve got a pandem— we’ve got a real problem. Imagine if he had said something. How many more people would be alive?"

Trump did, in fact, refer to the coronavirus outbreak in his February 4 State of the Union  address.

“Protecting Americans’ health also means fighting infectious diseases,” he said. “We are coordinating with the Chinese government and working closely together on the coronavirus outbreak in China. My administration will take all necessary steps to safeguard our citizens from this threat.”

It would take three more Democratic presidential debates after the SOTU before Biden – apparently for the first time publicly on the campaign trail – addressed the epidemic, after a moderator at the February 25 debate in Charleston, S.C. raised the issue.

As Biden noted at Thursday’s town hall, he did pen an op-ed for USA Today in late January. In it he touted the Obama administration’s handling of the Ebola epidemic in Africa in 2014-15, and expressed concern “that the Trump administration’s shortsighted policies have left us unprepared for a dangerous epidemic that will come sooner or later.”

A partial timeline of the relevant period follows:

Jan. 14:  At a Democratic presidential debate in Des Moines, Iowa, neither Biden nor any other candidate raises the coronavirus issue.

(World Health Organization reports 41 cases and one death in Wuhan, and one exported case, in Thailand)

Jan. 27: Biden pens USA Today op-ed arguing that the administration’s public health policies have left the U.S. “unprepared for a dangerous epidemic that will come sooner or later.”

Feb. 4: In State of the Union, Trump says the administration is “working closely together on the coronavirus outbreak in China” and “will take all necessary steps to safeguard our citizens from this threat.”

Feb. 7: At a Democratic presidential debate in Manchester, N.H., only one candidate (Pete Buttigieg) makes a passing reference to “what we’re seeing coming out of China.” Biden says nothing.

Feb. 19: At a Democratic presidential debate in Las Vegas, none of the candidates nor the NBC News/MSNBC moderators raise the issue.

Feb. 25: At a Democratic presidential debate in Charleston, S.C., for the first time a moderator brings up the coronavirus situation. Biden recalls the Ebola situation, criticizes Trump’s policies and he would insist that China admits U.S. experts. (After weeks of resistance from Beijing, a WHO team including U.S. experts had arrived in China eight days earlier.)

See also:
Biden Misleads on Trump Administration’s Attempts to Get US Experts Into China Early On (Sept. 11, 2020)