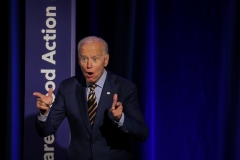 (CNSNews.com) – Democrat presidential nominee Joe Biden said on Monday that if a conservative Supreme Court moved to overrule the Roe v. Wade – the court’s 1973 decision that legalized abortion – he as president would work for legislation making the right to an abortion the law of the land.

During an NBC-hosted town hall in Miami, Florida, a young woman from Orlando said that when she was graduating from high school she knew she wanted to obtain a degree and start a career before starting a family.

“Having access to birth control and safe reproductive healthcare was imperative in making that true for me,” said Cassidy Brown. “So, considering the new Supreme Court nomination of Amy Coney Barrett, what are your particular plans to protect women’s reproductive rights in the U.S.?”

“Number one,” began Biden, “we don’t know exactly what she will do, although the expectation is that she may very well move to over – overview – overrule Roe. And the only thing – the only responsible response to that would be to pass legislation making Roe the law of the land.”

Neither Biden nor his questioner used the word “abortion.”

(Biden – or his campaign – later tweeted a video clip of the exchange, adding the note: “Roe v. Wade must remain the law of the land.”)

Senate Judiciary Committee hearings on Judge Barrett’s Supreme Court nomination are scheduled to begin on October 12. Liberal critics are worried that she will bring her views as a pro-life Catholic onto the bench.

Biden, himself a Catholic, has been moving increasingly away from the church’s teaching on the subject while campaigning for the presidency.

He long-held opposition to the Hyde Amendment, which prohibits federal funding of abortion except in cases of rape, incest, or when the mother’s life is endangered, changed abruptly last summer, after he came under fire over it from rivals in the Democratic primary.

He reaffirmed that new position during a CNN debate last March, after being prodded on the issue by Sen. Bernie Sanders.

Again without uttering the word “abortion,” Biden said the reason he had changed his stance on the Hyde Amendment “a while ago” was because, “if we’re going to have public funding for all healthcare along the line, there is no way you could allow for there to be a requirement that you have Hyde Amendment – a woman who doesn’t have the money could not have coverage under healthcare.”

The following month, Biden declared, during a virtual town hall with Hillary Clinton, that abortion is “an essential health care service” during the coronavirus pandemic.

“Health care delayed means health care denied,” he said. “States should not be using a public health crisis to infringe on a woman’s constitutional right.”

Biden has also pledged to rescind, as the Obama-Biden administration did three days after taking office in 2009, what critics calls the “global gag rule.” The Reagan-era Mexico City Policy, as strengthened under the Trump administration, withholds U.S. foreign health assistance funding from non-governmental organizations that promote or perform abortions, and from NGOs that give money to other NGOs that promote or perform abortions.

And he has promised to reverse what critics call the “domestic gag rule” – the Trump administration’s prohibition on Title X family planning funds going to programs and facilities that support, perform or refer patients for abortions.

Biden’s earlier shifts on the question of abortion are partly reflected in his ratings while a senator from NARAL Pro-Choice America, which bases its grades on lawmakers’ votes on abortion-related legislation and confirmations.

In his 2008 memoir “Promises to Keep: On Life and Politics,” Biden wrote that he was “personally opposed to abortion,” but did not think he had the right to impose “something I accept as a matter of faith” on others. He recalled telling a liberal Democratic colleague early on during his Senate career that while he would not vote to overturn Roe v Wade, “I will also not vote to use federal funds to fund abortion.”

See also:
Sanders: ‘Being Pro-Choice is an Absolutely Essential Part of Being a Democrat’ (Feb. 10, 2020)
Biden Reverses Himself, Again, on Amendment Restricting Taxpayer Funding For Abortion (Jun. 7, 2019)