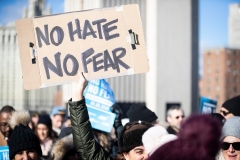 A march to raise awareness of anti-Semitism in New York City on January 1, 2020. (Photo by Ira L. Black/Corbis via Getty Images)

(CNSNews.com) – Seventy percent of House Democrats voted on Wednesday against a Republican-sponsored amendment to include anti-Semitism as a form of discrimination in programs that receive federal funding.

Among the 162 Democrats who voted against the amendment sponsored by Rep. Virginia Foxx (R-N.C.) were those representing ten of the 25 congressional districts with the largest Jewish populations.

Despite those 162 Democrat nay votes, the amendment to the Equity and Inclusion Enforcement Act (H.R.2574) passed, with the support of 189 Republicans and 66 Democrats. (One Republican, Rep. Thomas Massie of Kentucky, vote no.)

Although Republicans largely opposed H.R. 2574 itself, arguing that it “radically alters civil rights law,” Foxx sought to insert the amendment into the text before its final 232-188 vote on passage.

If it were to become law, the legislation would amend Title VI of the 1964 Civil Rights Act – which prohibits discrimination on the basis of race, color, or national origin – to allow for “individual civil actions in cases involving disparate impact.”

It would require school districts to appoint monitors to ensure that schools are in compliance with Title VI, and create a new special assistant for equity and inclusion at the Department of Education.

The White House has already signaled the president would veto it if it arrived on his desk.

The GOP-sponsored motion amended the text to require that the officials created by the legislation “consider antisemitism as illegal discrimination on the basis of race, color, or national origin.”

The 162 Democrats who voted against the anti-Semitism amendment included ten members who represent districts among the 25 with the largest adult Jewish populations.

The members representing the rest of the group of 25 districts with the biggest Jewish populations all voted in favor of the anti-Semitism amendment, with the exception of Rep. Karen Bass (Calif.), who did not vote.