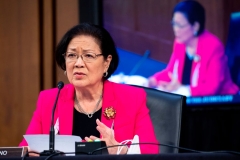 (CNSNews.com) - In the wake of two mass shootings allegedly perpetrated by 18-year-olds in New York and Texas, Sen. Mazie Hirono (D-Hawaii) expressed her support Thursday for raising the federal minimum age to buy a gun to 21 years old.

“I would support that,” Sen. Hirono said.

On May 14th, an 18-year-old gunman allegedly shot 13 people, 11 of whom were black in what will likely be classified as a hate crime that resulted in 10 total deaths. The gunman was legally able to purchase his weapon from a vintage gun store near his hometown, according to NPR.

He also successfully passed the shop’s background check despite the fact that state police had ordered a psychiatric evaluation on the 18-year-old last June.

Under Texas law and federal law, 18 year olds are legally allowed to purchase rifles. However, a federal firearms licensee cannot sell to anyone under the age of 21. In Texas, there is no age minimum for possession of a firearm, but you must be 21 years old to concealed carry.