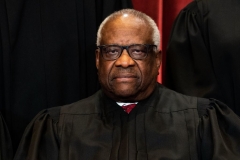 Associate Justice Clarence Thomas sits during a group photo of the Justices at the Supreme Court in Washington, DC on April 23, 2021. (Photo by ERIN SCHAFF/POOL/AFP via Getty Images)

(CNS News) – In response to an online petition calling for the removal of Supreme Court Justice Clarence Thomas as a professor at George Washington Law School, the school put out a statement both defending Thomas’s place on campus and affirming the school’s academic values.

In response to the June 24th Supreme Court decision to overturn Roe v. Wade, Jon Kay, a rising junior at George Washington, created an online petition calling for the removal of Justice Clarence Thomas as a lecturer at GW Law. Kay, who only recently learned that Thomas has lectured at GW Law since 2011, started the petition on Change.org this Sunday.

The petition claims that “the employment of Clarence Thomas at George Washington University is completely unacceptable.” According to Kay, “Judge Thomas is actively making life unsafe for thousands of students on our campus.” At the time of writing this article, the petition has amassed 7,414 signatures.

Despite this pressure, GW defended Judge Thomas’ position. Executive Vice President for Academic Affairs Christopher Bracey, along with GW Law Dean Dayna Bowen Matthew, sent an email to the GW community on Tuesday with the heading: “Affirming Academic Freedom and Freedom of Expression at GW.”

“Because we steadfastly support the robust exchange of ideas and deliberation, and because debate is an essential part of our university’s academic and educational mission to train future leaders […], the university will neither terminate Justice Thomas’ employment nor cancel his class in response to his legal opinions,” Bracey and Matthew wrote.

The letter also included a statement that “Justice Thomas’ views do not represent the views of either the George Washington University or its Law School.” However, the school affirms that Justice Thomas, “like all faculty members” at GW, “has academic freedom and freedom of expression and inquiry.”

The letter then refers back to the college’s academic freedom guidelines:

“The ideas of different faculty members and of various other members of the University community will often and quite naturally conflict. But it is not the proper role of the University to attempt to shield individuals within or outside the University from ideas and opinions they find unwelcome, disagreeable, or even deeply offensive.”

GW Law Professor Jonathan Turley condemned the petition, calling it “a continuation of the enforced orthodoxy now all too common on our campuses.” 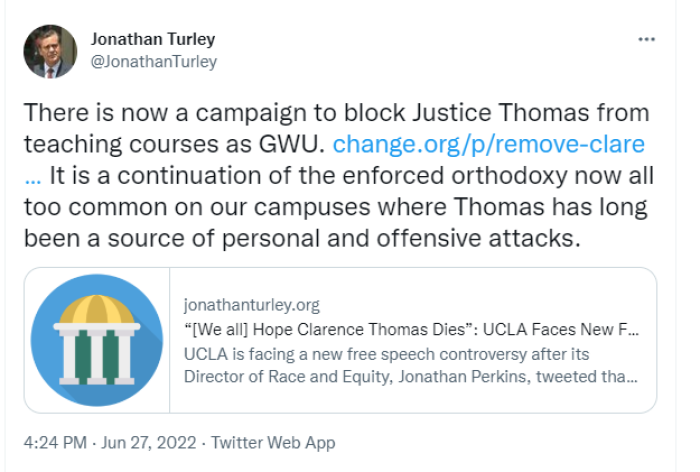 He also tweeted his support for Judge Thomas: “…I hope that Justice Thomas realizes that there are people at GWU who value a diversity of viewpoints and appreciate his willingness to share his time with our students.”

The Foundation for Individual Rights and Expression, a free speech advocacy group, retweeted a photo of the school’s statement, adding two “clapping-hands” emojis, expressing support for the University’s refusal to give in to the petition’s demands. 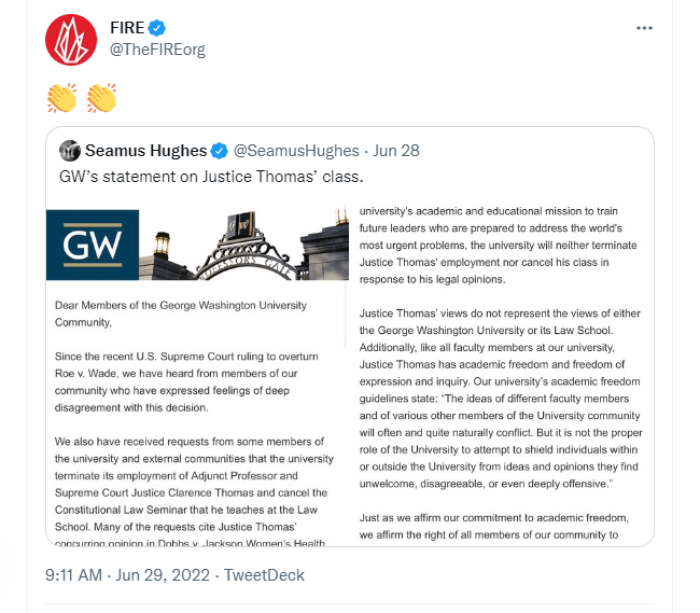