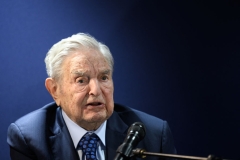 Hungarian-born US investor and philanthropist George Soros answers to questions after delivering a speech on the sidelines of the World Economic Forum (WEF) annual meeting in Davos on May 24, 2022. (Photo by FABRICE COFFRINI/AFP via Getty Images)

On July 31, George Soros penned an op-ed in the Wall Street Journal entitled, “Why I Support Reform Prosecutors,” in which he makes the argument for his years of supporting what he calls “reform-minded prosecutors” in large cities across the United States such as New York, Baltimore, Chicago, Los Angeles, and San Francisco.

Soros decries what he calls “demagoguery and divisive partisan attacks” that “dominate the debate” surrounding the issue of crime in the United States. Soros states that among the primary purposes of government is “to ensure public safety.”

“Yet our system is rife with injustices that make us all less safe. The idea that we need to choose between justice and safety is false,” writes Soros. The injustices he points to are the disproportionate levels of incarceration between racial groups as well as the overfunding and overcrowding of our prisons.

In his vision for a new system that values both safety and justice, Soros proposes spending more money on crime prevention “strategies that work.” These strategies include spending money on youth job programs, mental health services, and education for people serving time. Additionally, Soros writes that his agenda includes both stopping what he calls “the criminalization of poverty and mental illness,” as well as treating drug addiction “as a disease, not a crime.”

Soros acknowledges the common criticisms of his efforts, saying that “some politicians and pundits have tried to blame recent spikes in crime on the policies of reform-minded prosecutors.” In Soros’ view, these claims are unfounded:

“The research I’ve seen says otherwise. The most rigorous academic study, analyzing data across 35 jurisdictions, shows no connection between the election of reform-minded candidates and local crime rates. In fact, violent crime in recent years has generally been increasing more quickly in jurisdictions without reform-minded prosecutors. Murder rates have been rising fastest in some Republican states led by tough-on-crime politicians.”

Soros does not specify the name of what he claims to be “the most rigorous academic study,” nor does he provide a link to it.

He goes on to argue that the recent spikes in crime across the country come as a result of other factors, rather than the election of the prosecutors he has supported nationwide. The three main causes that Soros claims come from “serious scholars,” which he does not name, are “a disturbing rise in mental illness among young people due to the isolation imposed by Covid lockdowns, a pullback in policing in the wake of public criminal-justice reform protests, and increases in gun trafficking.”

Soros insists that he has supported these reform-minded prosecutors “transparently,” and assures the public that he has “no intention of stopping.”

“The funds I provide enable sensible reform-minded candidates to receive a hearing from the public. Judging by the results, the public likes what it’s hearing,” Soros concludes.

There are currently at least 75 prosecutors across the country that are supported by either Soros’ campaign contributions or Soros-backed infrastructure groups, according to a report from the Law Enforcement Legal Defense Fund.

Soros supports candidates for district attorney across the country through “a series of shell organizations, affiliates, and pass-through committees.” “Soros-linked prosecutors oversee 20% of Americans,” the report finds.

Many of these progressive prosecutors have been accused of backing the criminals more than the public, and being too lenient with regards to punishing criminal offenses. Soros-backed District Attorney Chesa Boudin of San Francisco was voted out of office in a specially-held recall election this June as crime rates skyrocketed around the city.

In mid-July, 715,833 residents of Los Angeles signed a petition to hold a similar recall vote for their Soros-linked DA George Gascon. He will be removed from his position if over 50% of voters vote to recall him, which is what happened in San Francisco.

In an initiative called “Rogue Prosecutors,” the Heritage Foundation seeks to keep track of Soros-linked prosecutors’ soft-on-crime policies and the effects they have on local crime rates.