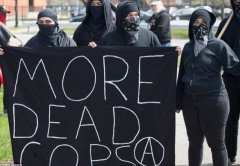 (CNS News) -- In a Jan. 5 executive order, President Donald J. Trump directed the State Department and the Justice Department to assess whether the left-wing Antifa organization should be classified as a "terrorist organization," and to consider listing Antifa as "aliens who are members of an identified criminal organization."

Antifa is a global, radical movement that claims it is anti-fascist and anti-racist. Many of its members or followers espouse left-wing ideologies such as communism, socialism, anarchism, and radical environmentalism. Its roots stretch back to thee 1930s Antifaschistiche Aktion, which was the "paramilitary arm of the Pro-USSR German Communist Party (KPD)," reported Chris Tomlinson at Breitbart News.

In his executive order, President Trump notes that the Immigration and Nationality Act "renders inadmissible aliens who have engaged or who are likely to engage in terrorist activity and those aliens who seek entry into the United States to engage, principally or incidentally, in unlawful activity.

"Active membership in a criminal association is relevant to the determination of whether an applicant for a visa or other immigration benefit is seeking to enter the United States to engage in unlawful activity."

As for Antifa's actions in the United States, the order notes, "reliable reporting suggests that the movement known as Antifa is directly or indirectly responsible for some of the recent lawlessness in our communities, and has exploited tragedies to advance a radical, leftist, anarchist, and often violent agenda."

-- In Berkeley, California, "during the August 27, 2017, protest, black-clad Antifa protestors viciously attacked a rally, including targeting at least one person because of his conservative political beliefs.  These protests resulted in 13 arrests on a range of charges, including assault with a deadly weapon and obstructing a police officer."

-- "During the demonstrations on February 1, 2017, 150 black-clad agitators contributed to an estimated $100,000 worth of property damage in Berkeley."

-- "[I]n June 2018, a Twitter account linked to Antifa shared the names of more than 1,500 Immigration and Customs Enforcement employees, leading others to track and publicly post some employees’ social media profiles, phone numbers, and home addresses, which, as intended, resulted in the employees being harassed."

-- "In late September of 2020, individuals in a moving truck distributed riot equipment — including shields, masks, and a sign emblazoned with an Antifa symbol — in Louisville, Kentucky, before riots ensued there. Hours later, the violent situation resulted in the shooting of two police officers."

"The Department of Justice has already publicly confirmed that actions by Antifa and similar groups meet the standard for domestic terrorism," states President Trump in the order.

"The violence spurred on by Antifa — such as hurling projectiles and incendiary devices at police, burning vehicles, and violently confronting police in defiance of local curfews — is dangerous to human life and to the fabric of our Nation," he wrote.