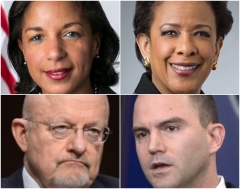 Nearly every major player in the Obama administration who was interviewed by Schiff's committee said the same thing -- no evidence of collusion.

“I never saw any direct empirical evidence that the Trump campaign or someone in it was plotting [or] conspiring with the Russians to meddle with the election,” Clapper said in his July 17, 2017 interview.

“That’s not to say that there weren’t concerns about the evidence we were seeing, anecdotal evidence…[redacted],” Clapper said. “But I do not recall any instance when I had direct evidence of the content of these meetings. It’s just the frequency and prevalence of them was of concern.”

During her interview, former Attorney General Loretta Lynch said she did "not recall that being briefed up to me," and added, "I can't say that it existed or not."

Former Deputy National Security adviser Ben Rhodes said in his Oct. 25, 2017 interview, "I saw indications of potential coordination, but I did not see, you know, the specific evidence of the actions of the Trump campaign."

When asked about evidence of the Trump campaign colluding or conspiring with the Russians, former Ambassador Susan Rice told the committee, "I don't recall intelligence that I would consider evidence to that effect."

Despite telling the House Intelligence Committee in 2017 that he "never saw any direct empirical evidence" of Trump colluding with the Russians to sway the 2016 election, former DNI James Clapper told CNN in May 2019 that the Trump campaign had been "essentially aiding and abetting the Russians."

He added, "And having dozens of contacts with Russians, some of whom were connected officially to Russian intelligence."

CNN's Brianna Keilar, to her credit, interjected, "To be clear, not meeting the legal definition of aiding and abetting."

Clapper replied, "Well, I’m using that in, uh, a parochial or colloquial sense, I guess. But certainly the president/candidate Trump, on the 27th of July exhorting the Russians, an adversary, an enemy of ours, to help him in his campaign against his opponent. And, by the way, the Russians complied with that request about 5 hours later."

It also merits noting that in a Dec. 17, 2017 interview -- five months after his closed interview with the House Intelligence Committee -- Clapper told CNN, "I think this past weekend is illustrative of what a great case officer Vladimir Putin is. He knows how to handle an asset, and that’s what he’s doing with the president.”

Trump is a Putin asset? Or is this another casual, colloquial remark?  The implication seems clear.

Clapper, as noted, was not the only former Obama official who told the committee under oath that they had seen no evidence of Trump-Russia collusion. However, that did not stop Democrat committee members from publicly stating the opposite.

As culled by Washington Post columnist Marc Thiessen, Chairman Schiff  repeatedly claimed that his committee had uncovered “plenty of evidence of collusion or conspiracy.”

In March 2017, two months after Trump's inauguration, Schiff told NBC's Meet the Press, “I can’t go into the particulars, but there is more than circumstantial evidence now."

Committee member Rep. Eric Swalwell (D-Calif.) said, "In our investigation, we saw strong evidence of collusion," and claimed that President Trump was “working on behalf of the Russians.”

Rep. Jerrold Nadler (D-N.J.), chairman of the House Judiciary Committee, said, “It’s clear that the campaign colluded, and there’s a lot of evidence of that.”

Former CIA Director John Brennan declared that  Trump “is wholly in the pocket of Putin.” On NBC's Meet the Press, Brennan asserted, “I called [Trump’s] behavior treasonous, which is to betray one’s trust and aid and abet the enemy, and I stand very much by that claim.”

In a New York Times commentary, Brennan wrote, "Trump’s claims of no collusion are, in a word, hogwash.”