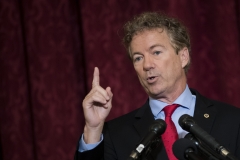 "Some of the highlights" from the report "include the National Institutes of Health spending $2.3 million injecting beagle puppies with cocaine, and separately spending $187,500 to verify that kids love their pets," reported Paul's office in a statement. 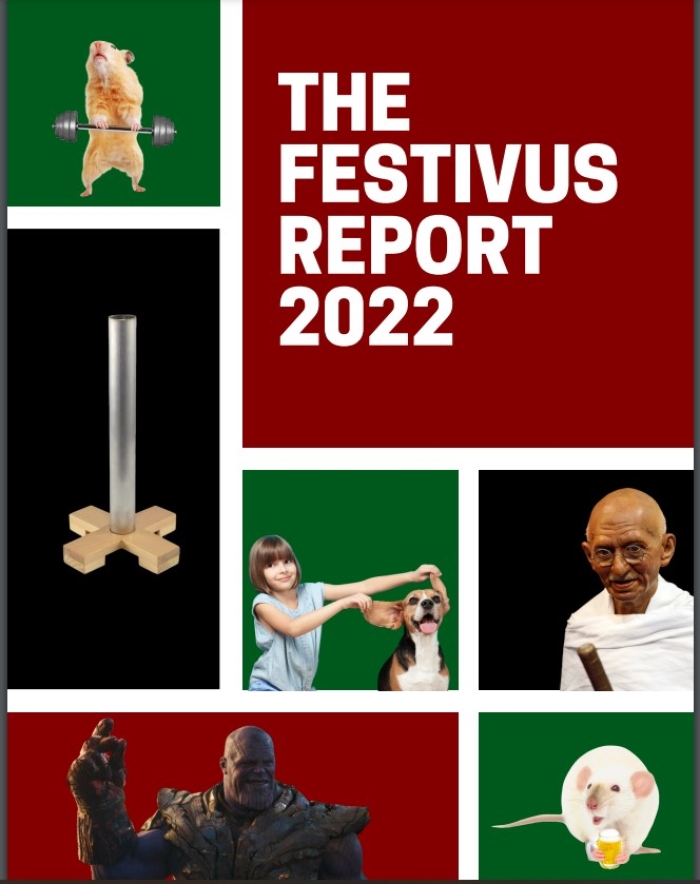 This is the eighth Festivus Report Senator Paul has released since entering the Senate in January 2011. In addition to the examples of wasteful spending, Paul's report notes that the U.S. national debt is above $31 trillion and that the "debt has risen so rapidly that the Congressional Budget Office projects that, within the next 30 years, there is not a single year in which the federal budget will balance."

Among the items of wasteful federal spending in the report are the following:

$140 Million in COVID Relief Funds to Construct an 11,000 Square Foot Spa. Broward County, Florida used $140 million in COVID relief funds to "to construct an 800-room luxury hotel overlooking the Atlantic Ocean that includes 30,000 square feet of pool decks, a rooftop bar, and even a 11,000-square-foot spa and fitness center."

"I’m talking really expensive vehicles, here: Porsches, Ferraris and even Lamborghinis," said Paul. "One managed to purchase a whole 'fleet' of luxury cars using $17 million (yes, you read that right) taxpayer dollars,18 which included a Corvette Stingray, a Porsche Macan and a Bentley Convertible. Of that, the Federal government has only recouped $7.2 million." 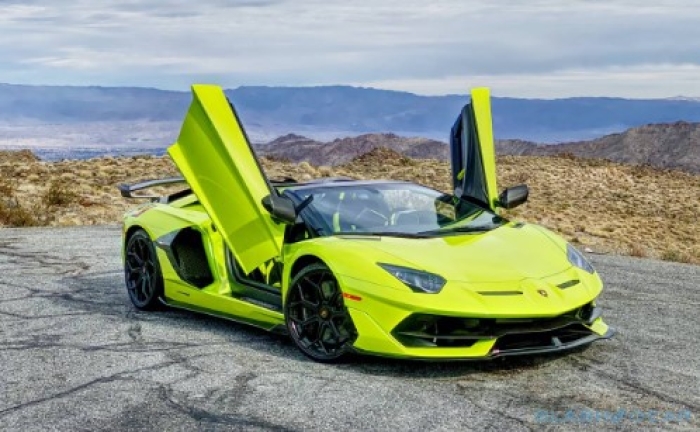 $1.6 Million in COVID Relief Money to Upgrade Turf Fields. COVID relief funds were used to "help" schools recover from the pandemic but there were few restrictions on how the schools spent the money -- 20% had to be sued to help students "recover from learning loss."

For instance, the Whitewater Unified School District in Wisconsin "received roughly $2 million in COVID-19 relief funds, and only used the minimum 20% on students," reads the report. "$1.6 million was left to use on other projects, and they decided to use it all on upgrading the school athletic fields. Now we know where the school district’s priorities are -- and it’s not helping students recover from months of remote learning!"

$168 Million to Help Illegal Immigrants Avoid Deportation. As the Festivus Report states, "In 2021, the Department of Health and Human Services’ Office of Refugee Resettlement provided the Vera Institute of Justice $168 million with a one-year contract to provide free legal services to help illegal immigrants avoid deportation."

From those funds, a "vast majority" are "subcontracted to lawyers who provide legal representation in HHS facilities and immigration courts," reads the report. "In fact, the government has provided the organization with over $1.1 billion of your taxpayer dollars since 2008.... What border crisis?"

$3 Million to Construct a Gandhi Museum. In the fiscal year 2022 omnibus spending bill there were $9 billion in earmarks, including $3 million for a Mahatma Gandhi museum. The website for the museum describes its purpose as "establishing 'a cultural and educational place-based initiative to inspire visitors to embrace these timeless values in their own lives.'"

$3 Million to Watch Hamsters Fight on Steroids. Since "1996, the National Institutes of Health has annually awarded Northeastern University over $3 million dollars to watch steroid-injected hamsters fight to study whether "current drugs for aggressive youth suppress steroid-induced aggression," reads the report.

Instead of using more drugs to counter steroid abuse, asks the report, maybe it would be better "to stop abusing steroids altogether. ... But this entire study raises an obvious question: should we be injecting steroids in rodents in the first place?" 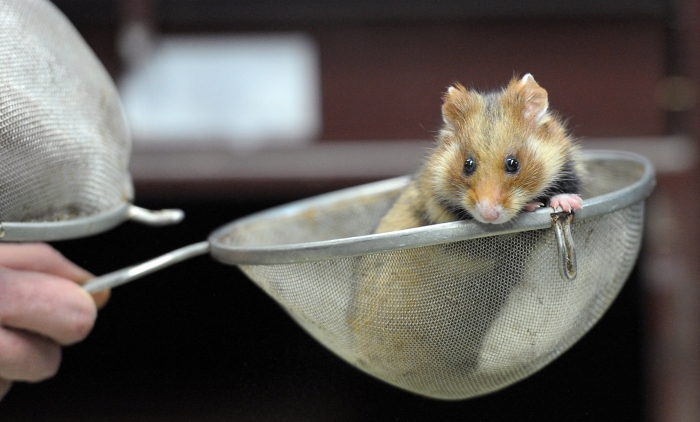 "What’s up with your government’s obsession with getting animals high?" asks the Festivus Report.

$1.1 Million to Train Mice to Binge Drink Alcohol. Since "2017, the NIH has given the University of Concepcion in Chile $1,101,157115 to study the influence of glycine receptors on alcohol consumption….by training mice to get drunk," reads the report. For the study, "researchers injected two different types of mice with alcohol within a tight enclosure, recorded their behavior over five minutes, and then compared their reactions."

Apparently, humans and mice may get drunk the same way, although the report wonders if the "government really needs that much money to get some mice tipsy?"

$118,971 to Research if Thanos Could Snap His Fingers Wearing the Infinity Gauntlet. Thanos is a fictional character in the Marvel movie Avengers: Infinity War. In the movie, "Thanos sports an 'Infinity Gauntlet,' which gives the wearer extraordinary powers merely by snapping one’s fingers," reads the report.  "Inspired by the film, researchers at Georgia Tech convinced grant reviewers at the National Science Foundation (superhero fans themselves, one assumes) to give them $118,971 to study if a real-life Thanos could actually snap his fingers while wearing the Infinity Gauntlet."

"The study ultimately determined wearing metal gloves while attempting to snap does not generate enough friction between one’s fingers to successfully create a snap. In their own words, '[o]ur results suggest that Thanos could not have snapped because of his metal armored fingers. So, it's probably the Hollywood special effects, rather than actual physics, at play!'"

The list of items examined in the Festivus Report are listed below. 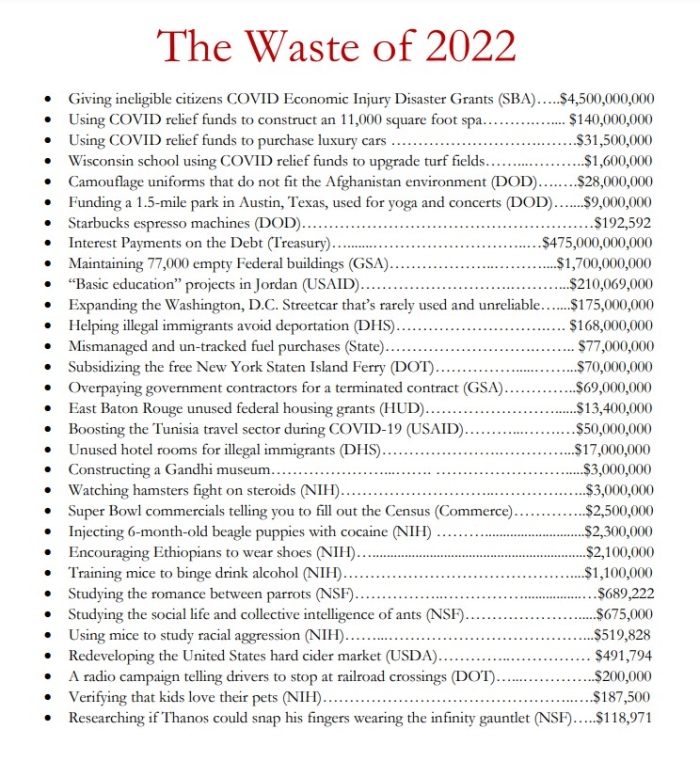