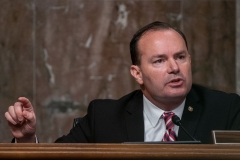 (CNS News) -- On Twitter, Sen. Mike Lee (R-Utah) criticized President Joe Biden's exit plan in Afghanistan as a "historic failure," stating there was a "lack of adequate planning" and "management" by the administration.

"After two decades of heroism from Americans in uniform, all is being undone in Afghanistan," Sen. Lee tweeted on Aug. 16. "Starting, expanding, and continuing a military conflict should never be easy, and these difficulties remind us that there were good reasons why the founders made it difficult to start a war."

/3 I pray for the safety of those Americans still in harm’s way, and I will continue to hold President Biden to account for this historic failure.

He continued in a second tweet, "While it has long been the right policy to navigate a withdrawal from our nation’s longest war, the lack of adequate planning, security, and management has placed brave Americans and others at risk."

"I pray for the safety of those Americans still in harm’s way, and I will continue to hold President Biden to account for this historic failure," said Lee in a third tweet.

In April, the executive branch announced that the remaining U.S. troops and civilian personnel in Afghanistan would be removed by Sept. 11, 2021.  Then, in July, Biden announced a deadline of Aug. 31.

Last week, the Taliban started to quickly move against Afghan security forces. By Monday, Aug. 16, the Taliban reportedly had surrounded the international airport in Kabul and tens of thousands of Afghans were scrambling to get out of the country.