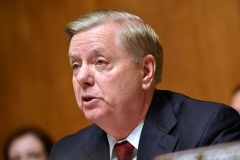 (CNS News) -- In his opening statement on day three of the hearings for Supreme Court-nominee Amy Coney Barrett, Senator Lindsey Graham (R-S.C.) said this is the "first time in American history that we’ve nominated a woman who is unashamedly pro-life," and it "has been a long time coming."

Graham, who is chairman of the Senate Judiciary Committee, also thanked President Donald Trump for selecting Barrett for the court, and giving her the opportunity to showcase her talents.

“Here is what is important to me," said the senator in his opening remarks.  "Senators Blackburn [R-Tenn.] and Ernst [R-Iowa] are two conservative women on this committee. It is a very give-and-take society called America, but there is one group in America I think is having a hard time of it, and that is conservatives of color and women conservatives."

“There is an effort by some in the liberal world to marginalize the contribution because you come out on a different side of an issue – particularly abortion," said Graham. "This hearing, to me, is an opportunity to not punch through a glass ceiling, but a reinforced concrete barrier around conservative women. You're going to shatter that area."

“I have never been more proud of the nominee than I am of you," he added. "You have been candid to this body about who you are and what you believe. You’ve been reassuring in your disposition, and this is history being made, folks."

“This is the first time in American history that we’ve nominated a woman who is unashamedly pro-life and embraces her faith without apology, and she is going to the court," said the senator.

He continued, “This won’t be celebrated in most places. It will be hard to find much commentary about this moment in American history. But in many of our worlds, this will be celebrated. This has been a long time coming and we have arrived."

“So, I want to thank President Trump for giving you the opportunity to showcase your talents," said Graham.