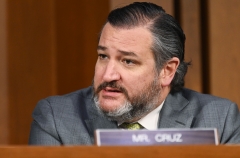 (CNS News) -- In a statement released today about President Joe Biden's withdrawal plan from Afghanistan, Sen. Ted Cruz (R-Texas) said the result has been "an embarrassing spectacle, a diplomatic humiliation, and a national security catastrophe."

"I have long called for a deliberative, planned, vetted, and secure withdrawal from Afghanistan while maintaining maximum leverage," said Sen. Cruz.  "Wars should have ends. That is the opposite of what President Biden has pursued."

In April, President Biden announced that all remaining U.S. troops and diplomatic personnel would be withdrawn from Afghanistan by Sept. 11, 2021. In July, he set a deadline of Aug. 31 for the final exit.

"The Trump administration spent years negotiating an orderly withdrawal on a fixed timetable with extensive support from regional actors," said Cruz in his statement.

"President Biden tore up that approach, as he did with so many of the national security victories from the Trump era," Cruz added, "halting Putin's Nord Stream 2 pipeline, achieving the Abraham Accords, imposing maximum pressure on Iran, cutting off Palestinian terrorists, working with partners throughout the Western Hemisphere to contain illegal immigration, and the list goes on and on."

"In Afghanistan, President Biden said he was putting his ‘trust' in ‘the capacity of the Afghan military,' and the result has been, again, an embarrassing spectacle, a diplomatic humiliation, and a national security catastrophe," concluded the senator.

U.S. troops have been in Afghanistan for nearly 20 years. A reported 2,448 American soldiers have died in the conflict.