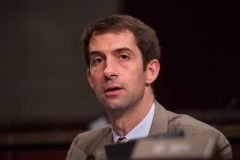 (CNSNews) -- On Tuesday, May 19, Sen. Tom Cotton (R-Ark.) introduced the No Bailouts for Illegal Aliens Act, which would prohibit sending any future coronavirus/stimulus funds (CARES Act) to states or cities unless they certify that no funds are being doled out to illegal aliens.

"Congress passed the CARES Act to help workers impacted by the China virus pandemic, not to give a handout to those who broke our immigration laws," said Cotton on Tuesday. "The federal government shouldn't be subsidizing states' efforts to send cash to illegal aliens."

As explained on Senator Cotton's website, the No Bailouts for Illegal Aliens Act would do the following: