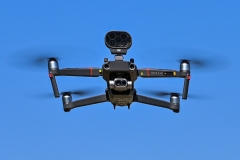 (CNSNews) -- In a May 5 letter to Attorney General William P. Barr, House Rep. Matt Gaetz (R-Fla.) called on the top law enforcement office in the country to take whatever action possible to ground the use of DJI drones, made by the Chinese, because of concerns that the surveillance craft could be providing data to the Communist Chinese government.

“China is massively expanding a Trojan horse spying operation in our country and your local police department may be unknowingly helping them," said Rep. Gaetz in the statement.

"The United States Army and the Department of Interior have banned their use of these DJI drones, citing vulnerability and potential value for other countries," he said.  "The Department of Homeland Security wrote a scathing report that said that China specifically goes after local law enforcement."

"They did so even before the coronavirus so that they can get key information transmitted to the Chinese government," he added.  "Then, our own Department of Homeland Security wrote that this is precisely the type of information we’re worried that China might sell to terrorists."

In the letter to Attorney General Barr and Deputy Attorney General Jeffrey Rosen, Gaetz said the Army and DOI banned the drones for reasons of "national security, grounded in well-established assessments that DJI UAS (drones) may transmit sensitive information to China."

"That same report states that 'SIP Los Angeles further assesses with high confidence the company is selectively targeting government and privately-owned entities within these sectors [infrastructure and law enforcement] to expand its ability to collect and exploit sensitive U.S. data,'" Gatez states in the letter.

The DJI website claims it has donated drones to “45 police, fire and public safety organizations in 22 states," including at least two drones to the Daytona Beach Police Department for aiding in the fight against the coronavirus, says Gaetz.

"These 'donations' are deeply troubling to us," he writes.

The letter then asks the attorney general what authority he has to restrict the use of the drones and, if possible, when will he take action.

Local police departments lack the technical expertise and cyber-forensic tools "necessary to determine whether or not these [drones] are transmitting sensitive data to the CCP regime," said the congressman. "Furthermore, because these [drones] may be connected to police computers, it seems possible that they may exfiltrate sensitive law-enforcement data to China."