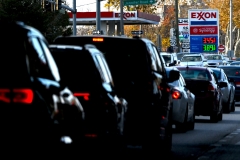 (CNS News) -- President Joe Biden's decision to release 50 million barrels of oil from the Strategic Petroleum Reserve to lower gas prices is "less than three days of U.S. oil consumption," and will have "no meaningful impact on gas prices," said Steve Milloy, a former Trump EPA transition member and the founder of JunkScience.com.

Sen. Joe Manchin (D-W.Va.) described Biden's decision as a "band-aid" that will "not solve" the "self-inflicted" energy crisis that the administration's policies have created. Manchin urged Biden to re-start the Keystone XL pipeline, which will provide the U.S. "with up to 900,000 barrels of oil per day from Canada, one of our closest allies."

In a Nov. 23 tweet, Milloy wrote, "Joe Biden is going to release 50 million barrels of oil from the Strategic Petroleum Reserve. That is less than three days of US oil consumption (18 million barrels/day during the pandemic year of 2020). The release will have no meaningful impact on gas prices. Ridiculous."

Milloy also posted a screenshot of a U.S. Energy Information Agency (EIA) document about oil consumption in the U.S.  As the document states, "In 2020, the United States consumed an average of about 18.19 million barrels of petroleum per day," which was low.

This decrease in consumption was "largely the result of the global response to the coronavirus (COVID-19) pandemic," said the EIA.

"Today's release from the Strategic Petroleum Reserve is an important policy Band-Aid for rising gas prices, but does not solve for the self-inflicted wound that shortsighted energy policy is having on our nation," said Chairman Manchin.

"Historic inflation taxes and the lack of a comprehensive all-of-the-above energy policy pose a clear and present threat to American's economic and energy security that can no longer be ignored," he said. "I continue to call on President Biden to responsibly increase energy production here at home and to reverse course to allow the Keystone XL pipeline to be built which would have provided our country with up to 900,000 barrels of oil per day from Canada, one of our closest allies."

In the Wall Street Journal, Nov. 21, former EPA Administrator Andrew Wheeler wrote, "Gasoline prices are the highest they have been in seven years and inflation is at a 30-year high, a double hit to American families. The Biden administration has aggravated the situation with new regulatory requirements on oil and gas producers as well as limits on domestic oil and gas exploration."

Commenting on the high gas and heating prices, Biden Energy Secretary Jennifer Granholm said, "We're working through an energy transition. We've got to start by adding energy. The reality is, we have to take some time to get off of oil and gas, we recognize this. This is a transition."

Biden Energy Secretary Jennifer Granholm on rising gas prices: "We're working through an energy transition...The reality is, we have to take some time to get off of oil and gas, we recognize this. This is a transition." pic.twitter.com/ZOCJIdZCa5