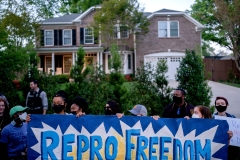 Pro-abortion activists protest outside the house of US Supreme Court Justice Samuel Alito, May 9, 2022. (Getty Images)

(CNS News) -- Forty Republican House members have signed a resolution that condemns the pro-abortion activists protesting outside the homes of the conservative justices of the Supreme Court, noting that they are there to try to intimidate the justices to change their opinion about overturning Roe v. Wade, and calling on the Justice Department to enforce the law that prohibits such protests outside judges' homes.

Back on May 2, Politico reported on an opinion written by Justice Samuel Alito that argued for overturning Roe v. Wade and Planned Parenthood v. Casey in relation to a current case, Dobbs v. Jackson Women's Health Organization. The opinion was leaked to Politico, and the news outlet reported that four other justices supported Alito's argument: Clarence Thomas, Neil Gorsuch, Brett Kavanaugh, and Amy Coney Barrett. 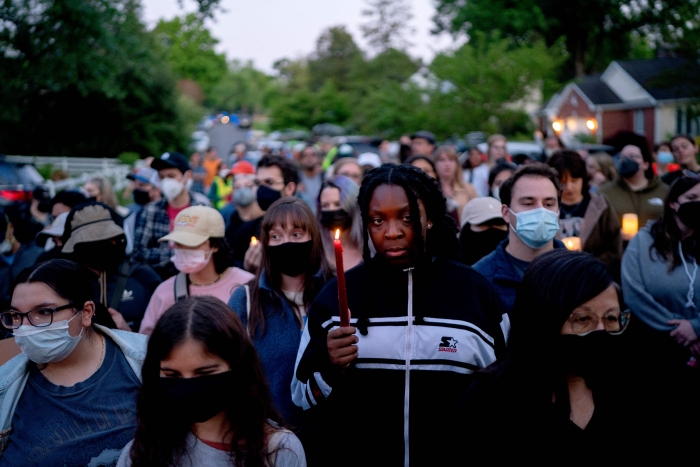 Since that story, the addresses of the five justices were leaked to the public, and numerous radical activists have been protesting outside the justices' homes.

“The possibility that individual states may again be allowed to prohibit the killing of unborn children has, of course, sent the Democrat Party and other radical pro-abortion activists off the deep end," said House Republican Conference Vice Chairman Mike Johnson (R-La.), who introduced the resolution.

“As the White House continues to equivocate, this resolution makes the position of Congress crystal clear: violence, property damage, threats, and intimidation tactics must be condemned, and these blatant violations of federal and state laws must be prosecuted," said Johnson. 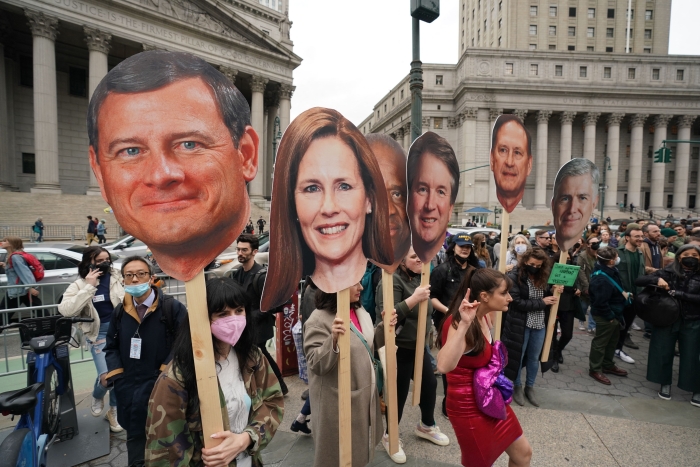 Federal law 18 U.S.C. 1507 states, "Whoever, with the intent of interfering with, obstructing, or impeding the administration of justice, or with the intent of influencing any judge, juror, witness, or court officer, in the discharge of his duty, pickets or parades in or near a building housing a court of the United States, or in or near a building or residence occupied or used by such judge, juror, witness, or court officer, or with such intent uses any sound-truck or similar device or resorts to any other demonstration in or near any such building or residence, shall be fined under this title or imprisoned not more than one year, or both."  (Emphasis added.)

The House Resolution, in part, states, "Whereas our constitutional system and the rule of law rely upon the independence of judges who are not subject to  the whims of public opinion or the political process" and "Whereas following the leak of the draft opinion in Dobbs v. Jackson Women’s Health Organization, churches and the headquarters of a pro-life organization were firebombed and vandalized, and activists sought to intimidate Justices of the Supreme Court by protesting outside their homes."

Therefore, it reads, be it resolved that the House of Representatives,

(1) condemns the unauthorized leak of the draft opinion in Dobbs v. Jackson Women’s Health Organization and the ensuing violence, damage to property, and attempted intimidation of Justices of the Supreme Court by pro-abortion activists;

(2) expresses deep concern regarding the erosion of Americans’ faith in our institutions;

(3) unwaveringly supports the notion that the judiciary must remain free from political interference and insulated from public opinion so that it may ensure every American is afforded equal and impartial justice under the law; and 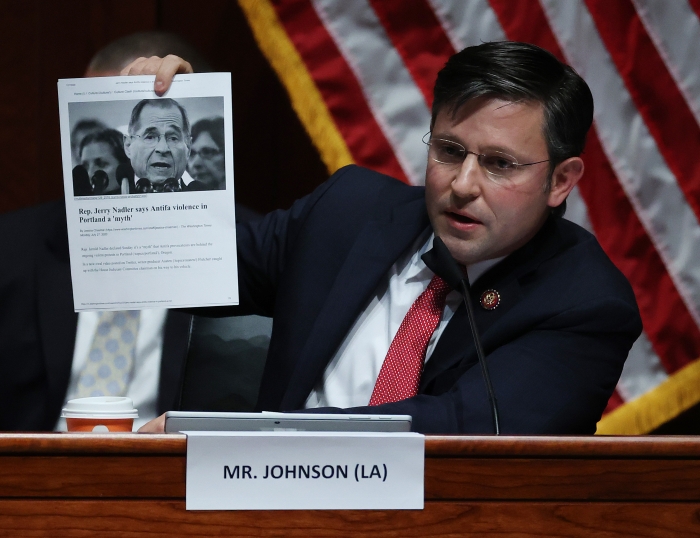 (4) calls upon the Department of Justice to enforce section 1507 of title 18, United States Code, with respect to protests outside of the homes of sitting Supreme Court Justices.

Although Republican lawmakers have called on Attorney General Merrick Garland to enforce the law, his office, to date, has allowed the protests to continue. However, the Justice Department issued a statement on May 4 that reads, “The Attorney General directed the U.S. Marshals Service to help ensure the Justices’ safety by providing additional support to the Marshal of the Supreme Court and Supreme Court Police."

The federal statute is clear. Today, @GovLarryHogan and I called on U.S Attorney General Garland to take action and enforce the law. https://t.co/J9tT41MHJE

In a joint letter to Garland, Virginia Gov. Glenn Youngkin (R) and Maryland Gov. Larry Hogan (R) wrote, “It is in your hands to ensure that applicable federal law is enforced to preserve the integrity of our American judicial system and the safety of our citizens.... In short, federal law prohibits picketing the home of a judge with the aim to influence the judge’s decision making process.”

On FNC's Your World, Youngkin said, "The statute is incredibly clear. It basically says if you are parading or picketing in order to try to influence a judge, it’s punishable with up to a year in prison. That sounds illegal to me. Of course, this leak was done in order to influence and intimidate our justices. And that’s exactly what these parades and picket lines are trying to do." 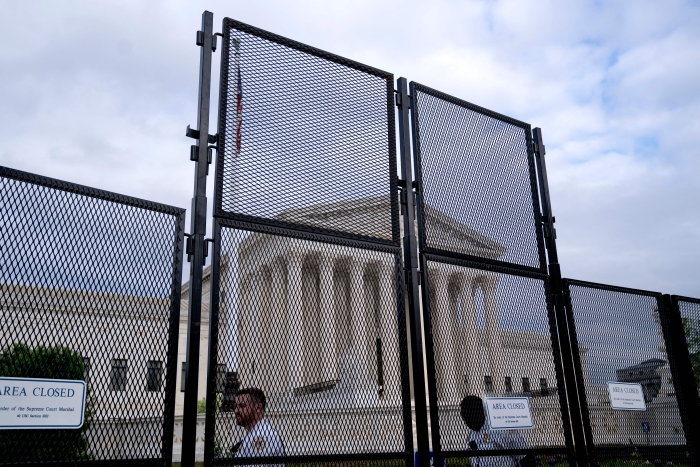 "The state police are at the ready to support local resources and federal resources," said Youngkin. "We have substantial resources ready to go. Local police, I have asked them to create a perimeter around each of the justices' homes with support from state police as needed."

"This is wrong," he added. "We have justices that have children, they have neighbors and families. This is wrong based on federal statute, and it should be stopped."

In a May 11 letter to Attorney General Garland, Sen. Charles Grassley (R-Iowa) said, "I have serious concerns about the safety of the justices and the attacks on our judiciary. I urge you to publicly commit to protecting the justices, and to condemn and prosecute anyone seeking to threaten and intimidate the Court into changing its decision."

"It is beyond dispute that far-left activists have launched a concerted and coordinated effort to intimidate the Court into changing the draft Dobbs decision," wrote Grassley. "As the Washington Post recently reported, '[p]rotestors outside Brett M. Kavanaugh’s house warned the Supreme Court justice this weekend, ‘If you take away our choices, we will riot.’ Demonstrators outside Justice Samuel A. Alito’s home chanted, 'Abort the court!' These are plainly efforts to bully the Court in response to the leaked Dobbs opinion."

He continued, "The President may choose to characterize protests, riots, and incitements of violence as mere passion. But these attempts to influence and intimidate members of the federal judiciary are an affront to judicial independence. No fair-minded person can question that 'such conduct inherently threatens the judicial process.'"

More video about the protests here.