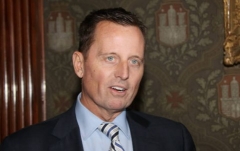 Richard Grenell, the former Acting Director of National Intelligence (DNI), said that Rep. Eric Swalwell (D-Calif.), as a member of the House Intelligence Committee, "spent tens of millions of taxpayer dollars weaponizing the US government & telling Americans there was massive collusion," even though behind the scenes more than 50 people had testified they knew of "no collusion."

In recent weeks, as acting DNI, Grenell declassified and released documents about the Democrats' investigation of Russia-Trump collusion. Those documents have shown that no one in the top level of the Obama administration saw any evidence of Trump-Russia collusion in 2016-17. Obama officials repeatedly testified during interviews with the House Intelligence Committee that they never saw any evidence of collusion.

In a May 28 tweet to Grenell, Rep. Swalwell said Grenell had betrayed the "brave intelligence officers" of the United States and was enabling President Trump.

Grenell tweeted in response, "You spent tens of millions of taxpayer dollars weaponizing the US government & telling Americans there was massive collusion. Your own committee interviewed more than 50 people under oath & they all said the same thing: they know of no collusion. But on TV you said the opposite."

As one example, in March 2019, Swalwell told CNN, "In our investigation, we saw strong evidence of collusion. The Republicans now are choosing to bury it."

Swalwell further claimed, "there's also evidence that the public has not seen."

The report by Special Counsel Robert Mueller, released to the public in April 2019, concluded there was no evidence of Russia-Trump collusion during the 2016 campaign.

In subsequent tweets to Swalwell on May 28, 2020, Grenell wrote, "Oh, I read. I read it all. And you lied about collusion. And Americans who see the facts that you tried to hide are furious."

"I read the transcripts," said Grenell. "There were lots of questions from Democrats. Lots. You just didn’t find any collusion when they were under oath -- so the transcripts were the only thing you didn’t leak to the DC media."

"You [Swalwell] said the opposite knowing what the 50 people said under oath -- and yet for years you didn’t want their transcripts to be made public," tweeted Grenell.  "Transparency is required! Americans deserve to see how this hoax developed and who silenced those who raised doubts early on."

The tweets below are presented as they appear on the twitter feed of Richard Grenell on May 28, 2020:

Before working as Acting Director of National Intelligence, Grenell served as the U.S. ambassador to Germany. Grenell is gay and his partner is Matt Lashey.