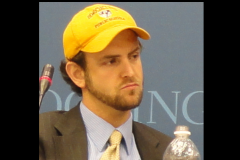 (CNS News) -- Seth Andrew, a former senior adviser to President Barack Obama on education and civic technology, was arrested on Apr. 27 and charged with alleged wire fraud, money laundering, and the theft of $218,000 from a charter school network that he founded, reported the U.S. Attorney's Office for the Southern District of New York.

Andrew, 42, also a former senior adviser in the U.S. Department of Education, is the founder of Democracy Prep, a network of public charter schools in Harlem, the Bronx, Camden, Baton Rouge and Washington, D.C. He earned his Masters in Education from Harvard University and his B.A. from Brown University.

“As alleged, Seth Andrew abused his position as a founder of a charter school network to [allegedly] steal from the very same schools he helped create," said Audrey Strauss, the U.S. Attorney for the Southern District of New York.

"Andrew is not only alleged to have stolen the schools’ money but also to have used the stolen funds to obtain a savings on a mortgage for a multimillion-dollar Manhattan apartment," said Strauss.   "Thanks to the FBI’s diligent work, Andrew now faces federal charges for his alleged scheme.”

In the scheme, Andrew allegedly moved school funds from two Escrow Accounts -- funds reserved in case the school dissolved -- and then shuffled them through a couple different bank accounts in 2019. As the U.S. Attorney's office relates, Andrew represented to a bank employee "that he was a 'Key Executive with Control of' School Network-1 Charter School, which was a lie."

Andrew then allegedly used the funds to help obtain a lower interest rate on a mortgage for a residential property he wanted buy in New York City, for approximately $2,368,000, reported the U.S. Attorney's Office.

"To effectuate that purchase, ANDREW, and his spouse, obtained a mortgage from Bank-2 in the amount of $1,776,000 with an interest rate of 2.5% –  taking full advantage of the promotion Bank-2 offered," said the U.S. Attorney's Office.

William F. Sweeney Jr., the Assistant Director of the FBI's New York Field Office, said,  “Locking into the lowest interest rate when applying for a loan is certainly the objective of every home buyer, but when you don’t have the necessary funds to put down, and you [allegedly] steal the money from your former employer to make up the difference, saving money in interest is likely to be the least of your concerns."

"We allege today that Andrew did just that, and since the employer he [allegedly] stole from was a charter school organization, the money he took belonged to an institution serving school-aged children," said Sweeney. "Today, Andrew himself is learning one of life’s most basic lessons – what doesn’t belong to you is not yours for the taking.”

The Office also stressed that the "charges in the Complaint are merely allegations, and the defendant is presumed innocent unless and until proven guilty."