(CNS News) -- In a statement released today, the Federal Communications Commission (FCC) announced that it had rejected a call by the liberal Open Markets Institute to "block Elon Musk's purchase of Twitter."

“The FCC has no authority to block Elon Musk’s purchase of Twitter, and to suggest otherwise is absurd," said FCC Commissioner Brendan Carr. "I would welcome the full FCC making it clear that we will not entertain these types of frivolous arguments.”

The Open Markets Institute, which is headed by Barry C. Lynn, said on Tuesday, Apr. 26, that Musk's purchase of Twitter "poses a number of immediate and direct threats to American democracy and free speech. Open Markets also believes the deal violates existing law, and that the Federal Communications Commission (FCC), the Department of Justice (DOJ), and the Federal Trade Commission (FTC) have ample authority to block it." 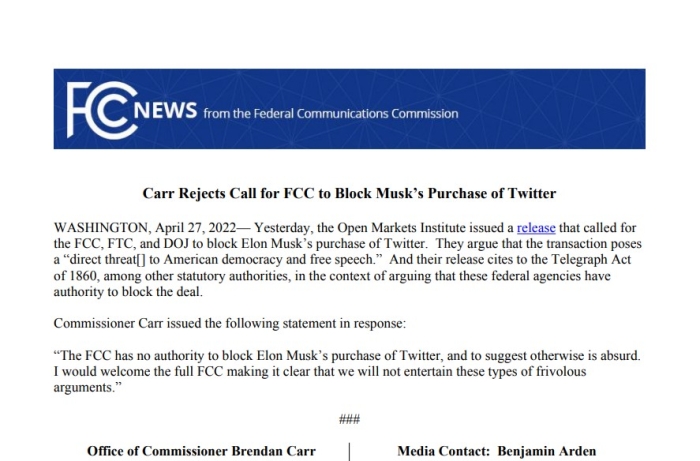 The Open Markets Institute cited the Telegraph acts of 1860 and 1866, the Mann-Elkins Act of 1910, and the Communications Act of 1934 in its petition.

Brendan Carr became the FCC commissioner under President Donald Trump in August 2017. Carr is a Republican.

In its 990 tax form of 2019, the Open Markets Institute in Washington, D.C. describes its "primary exempt purpose" as, "A team of journalists, researchers, lawyers, and advocates working together to expose and reverse the stranglehold that corporate monopolies have on our country."