Catholics for Choice projected pro-abortion messages on the exterior of the National Shrine of the Immaculate Conception in Washington, D.C.

(CNS News) -- After Catholics for Choice projected pro-abortion messages on the exterior walls of the National Shrine of the Immaculate Conception in Washington, D.C. -- on the eve of the annual March for Life -- several Catholic leaders and laymen condemned the action.

Archbishop Salvatore Cordilene, head of the Archiodese of San Franciso, who is attending today's march, tweeted, "The attempted desecration is enormous. Diabolical. Mother Mary, pray for them, now and at the hour of death. Amen."

Bill Donohue, head of the Catholic League, issued a statement saying that Catholics for Choice (CFC) is "an anti-Catholic outfit," and was not at the shrine "to observe Catholics attending a prayer vigil ahead of today's March for Life. No, they went to sabotage the event. They projected pro-abortion slogans on the Basilica."

The attempted desecration is enormous. Diabolical. Mother Mary, pray for them, now and at the hour of death. Amen. https://t.co/F89HCPnHUS

Cardinal Wilton Gregory, head of the archdiocese of Washington, D.C., said in a statement, "Those whose antics projected words on the outside of the church building demonstrated by those pranks that they really are external to the Church and they did so at night."

In his statement, Donohue added, "CFC is led by a lesbian activist, Jamie Manson. She is commanding a sinking ship at CFC and is trying anything to jump start it. Last year she explained her new strategy. "We have to talk back to the anti-choice movement in religious language. Because they're using religious language." 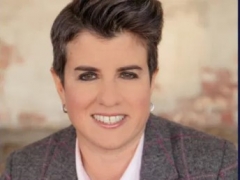 "CFC has no members," said Donohue.  "It is entirely funded by the pro-abortion establishment. The Ford Foundation has been its most consistent source of funding, extending back decades. It also receives huge grants from The Susan Thompson Buffett Foundation (Warren Buffett is a big fan of abortion), the Hewlett-Packard Foundation, and, of course, George Soros' Open Society Foundation. Without the ruling class, CFC would fold."

In reaction to CFC's apparent desecration of the National Shrine, Emily Tremblay tweeted, "Protection of the unborn is something as a Catholic we firmly believe in. This projection is disgusting."

In an early tweet, Bishop Strickland of Tyler, Texas said, "If this is real it is an atrocity. Support of murder projected on the Shrine of the Immaculate Conception??? I pray that it is a fake photo photoshopped for evil purposes. If it is real it is horrible & even faking it is evil."

In a statement, CFC's Jamie Manson said, "This evening, Catholics for Choice proudly stood for pro-choice Catholics and pushed back against the anti-choice activists participating in tomorrow’s March for Life. Our message: 1 in 4 abortion patients is Catholic. Stop stigmatizing them. Start listening.

Here comes the March for Life!pic.twitter.com/FbWI9QyPtq

“The March for Life twists our faith to villainize people who seek abortion services and silences the 68% of Catholics who do not want to see Roe v. Wade overturned. That’s why, during the “Vigil for Life” at the Basilica of the National Shrine of the Immaculate Conception in Washington, D.C., we prominently projected our message to Catholics who support legal abortion access and those who have abortions themselves: no matter what the Church hierarchy tries to make you think, you are not alone."

"Abortion bans like those sought by the organizers and participants of the March for Life – which force folks to give birth against their will and disproportionately harm people who already broken and crucified by the sinful structures of systemic racism, gender inequality, economic insecurity, and immigration restrictions – are the antithesis of my Catholic social justice values," said Manson.

According to Influence Watch, "Between 2006 and 2014 the CFC received over $18 million from The Susan Thompson Buffett Foundation, which gave a total of more than one billion dollars to pro-abortion foundations over the same period. CFC has also received funding from the William & Flora Hewlett Foundation ($5,735,500), the Ford Foundation ($2,650,000), and the Huber Foundation ($1,155,000)."