Biden After Verdict: 'Systemic Racism' is 'a Stain on Our Nation's Soul' 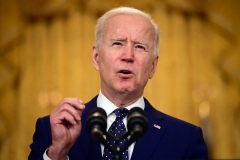 (CNS News) -- Following the jury's verdict in the George Floyd case, which found former police officer Derek Chauvin guilty of Floyd's murder, President Joe Biden said the death of Floyd "ripped the blinders off for the whole world to see" the "systemic racism that is a stain on our nation's soul."

"It was a murder in the full light of day, and it ripped the blinders off for the whole world to see the systemic racism the Vice President just referred to — the systemic racism that is a stain on our nation’s soul," said Biden, "the knee on the neck of justice for Black Americans; the profound fear and trauma, the pain, the exhaustion that Black and brown Americans experience every single day."

The president thanked the jury and the witnesses who testified, "who had to relive that day"-- May 25, 2020, when Floyd was pinned to the ground by the police as he pleaded, "I can't breathe, I can't breathe." He died at the scene, in Minneapolis, Minn.

"It’s a trauma on top of the fear so many people of color live with every day when they go to sleep at night and pray for the safety of themselves and their loved ones," said the president.

"Again — as we saw in this trial, from the fellow police officers who testified — most men and women who wear the badge serve their communities honorably," he said. "But those few who fail to meet that standard must be held accountable.  And they were today; one was. "

"No one should be above the law," said Biden. "And today’s verdict sends that message."

"In order to deliver real change and reform, we can and we must do more to reduce the likelihood that tragedies like this will ever happen and occur again," said Biden, "to ensure that Black and brown people or anyone — so they don’t fear the interactions with law enforcement, that they don’t have to wake up knowing that they can lose their very life in the course of just living their life."

"They don’t have to worry about whether their sons or daughters will come home after a grocery store run or just walking down the street or driving their car or playing in the park or just sleeping at home," he said.

"And this takes acknowledging and confronting, head on, systemic racism and the racial disparities that exist in policing and in our criminal justice system more broadly," said the president.

Biden then announced that the "federal government" has a role to play, and that he has tasked Attorney General Merrick Garland and two Justice Department nominees to research the issue and make recommendations on how to restore "trust between law enforcement and the community they are sworn to serve and protect."

He also stressed that there is "meaningful police reform legislation" in George Floyd's name in Congress. "We also need Congress to act," said Biden. "[I]t shouldn't take a whole year to get this done."

Near the end of his speech, Biden remarked, "I’ve said it many times: The battle for the soul of this nation has been a constant push and pull for more than 240 years — a tug of war between the American ideal that we’re all created equal and the harsh reality that racism has long torn us apart."