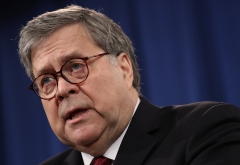 (CNS News) -- As the Trump presidency winds down, Attorney General William P. Barr released his resignation letter on Dec. 14, stating that the president's "record is all the more historic" because he accomplished it "in the face of relentless, implacable resistance."

Barr added that the lowest point in the plot against the president was the "effort to cripple, if not oust" the administration with "frenzied and baseless accusations of collusion with Russia."

Rep. Adam Schiff (D-Calif.), chairman of the House Intelligence Committee. Schiff regularly accused President Trump of "colluding" with or of somehow being an agent of Russia but he never produced evidence to support this claim. (Getty Images)

"I am greatly honored that you called on me to serve your administration and the American people once again as Attorney General," wrote Barr in his letter. I am proud to have played a role in the many successes and unprecedented achievements you have delivered for the American people."

"Your 2016 victory speech in which you reached out to your opponents and called for working together for the benefit of the American people was immediately met by a partisan onslaught against you in which no tactic, no matter how abusive and deceitful, was out of bounds," said the attorney general.

"The nadir of this campaign was the effort to cripple, if not oust, your administration with frenzied and baseless accusations of collusion with Russia," he said.

"Few could have weathered these attacks, much less forge ahead with a positive program for the country," write Barr. "You built the strongest and most resilient economy in American history – one that has brought unprecedented progress to those previously left out."

Barr continued, "You have restored American military strength. By brokering historic peace deals in the Mideast you have achieved what most thought impossible. You have curbed illegal immigration and enhanced the security of our nation’s borders. You have advanced the rule of law by appointing a record number of judges committed to constitutional principles."

"With Operation Warp Speed, you delivered a vaccine for coronavirus on a schedule no one thought conceivable – a feat that will undoubtedly save millions of lives," said Barr.

In closing, he wrote,  "As discussed, I will spend the next week wrapping up a few remaining matters important to the administration and depart on December 23rd.

"Wishing you, Melania, and your family a Merry Christmas and a Blessed Holiday Season. God Bless."

In a Dec. 14 tweet, President Trump wrote, "Just had a very nice meeting with Attorney General Bill Barr at the White House. Our relationship has been a very good one, he has done an outstanding job! As per letter, Bill will be leaving just before Christmas to spend the holidays with his family..."

William P. Barr, 70, was the 77th and 85th attorney general of the United States. He served in the George H.W. Bush administration and the Donald J. Trump administration.

After Dec. 23, Acting Attorney General Jeffrey Rosen will lead the Department of Justice.