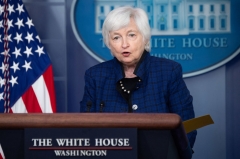 Treasury Secretary Janet Yellen speaks during the daily press briefing on May 7, 2021, in the Brady Briefing Room of the White House in Washington, DC. (Photo by SAUL LOEB/AFP via Getty Images)

(CNSNews.com) – Treasury Secretary Janet Yellen said Friday that the extra unemployment compensation funds were not a factor that made a difference in last month’s jobs numbers.

The secretary cited lack of child care and full-time in-person schooling as well as concern about the health consequences of the pandemic.

So first of all, I would note that the jobs report is a little bit stronger than the headline numbers might suggest on the hiring front. The number of people working part-time for economic reasons, namely involuntary part-time work, that number declined by 600,000, and hours- average hours of work ticked up by a 10th, so that means an extra margin in which employers are able to boost their labor is by adding to hours of existing employees, and that those employees want that extra work. They were involuntarily working part-time.

The labor market is volatile from month to month, and I think the best thing is to average through and say we’ve been creating over 500,000 jobs a month on average over the last three months. It’s clear that there are people who are not ready and able to go back into the labor force. Many children are back in school but not on a regular schedule.

It’s a challenge for parents to manage schedules where one child is in school a couple days a week and another child is in school some different days during the week, so caregiving responsibilities in absence of childcare are still important reasons why people are unable to return to work. You know concern about the pandemic and the health consequences I think remains a factor for many.

You know, I don’t think that the additional, the addition to unemployment compensation is really a factor that’s making a difference. There’s no question we’re hearing from businesses that they are having difficulty hiring workers, although over 300,000 workers I’d point out were added this last month in leisure and hospitality, which is the most badly affected sector, but when we look across states or across sectors or across workers, and if that were really the extra benefits that were holding back hiring, you’d see that even in states or for workers or in sectors where the replacement rate due to UI is very high.

You would expect to see lower job finding rates, and in fact, what you see is the exact opposite. You know, we have had a very unusual hit to our economy and the road back is going to be somewhat bumpy. We have to expect there are a variety of bottlenecks that are also relevant. So we’ve seen motor vehicle production shutdown in some places because of a shortage of semiconductors. There was a loss of jobs there this month.

They were setbacks in the lumber industry because of shortages there. Starting up an economy again trying to get it back on track after a pandemic in which there are a lot of supply bottlenecks is going to be I think a bumpy process, but I really don’t think the major factor is the extra unemployment.

"We have added an average of over half a million jobs during the past three months, and we saw promising growth with 331,000 jobs in leisure and hospitality, which includes the restaurants and bars that have been so badly battered by this pandemic," she said.

"We should also be encouraged by the ongoing expansion of the labor force. It’s a promising sign of our economy winning out over the pandemic. Last month, the labor market expanded as more people reported they are looking for work. Hours are increasing, and the share of workers forced into part-time jobs is declining. Indeed, we have made remarkable progress. After all, one year ago, we learned we’d lost over 20 million jobs in one single month," Yellen added.

The secretary said that when she first came to Washington in the early ‘90s, “a higher percentage of American women worked than almost any other developed nation.”

Male labor force participation has fared even worse. A smaller percentage of men are working now than at any point in the last 70 years. There are many drivers to these trends, but as my colleagues at the Council of Economic Advisers have pointed out, an undeniable one is the lack of support for people as they raise children and care for older relatives.

Our policymaking has not accounted for the fact that people’s work lives and their personal lives are inextricably linked, and if one suffers, so does the other. The pandemic has made this very clear. Between February and April of 2020, 4.2 million women dropped out of the labor force in large part due to an unexpected caregiving burden. Nearly 2 million have not yet returned.

The challenge before us is to help these 2 million women to return to the labor market, but to help the millions of other workers who left prior to the pandemic to do the same. It’s a core reason that last week President Biden proposed the American Families Plan. The plan offers up to $8000 to pay for child care and make sure kids from low-income families can attend for free.

It offers universal pre-K to three- and four-year-olds, and it provides up to 12 weeks unpaid family and medical leave. With today’s jobs numbers, I am confident we will have a strong, prosperous economy this year and in 2022, but what about the rest of the decade in the years beyond? Our country’s long-term economic health depends on whether we invest in American families and workers, and I’m very hopeful we will.