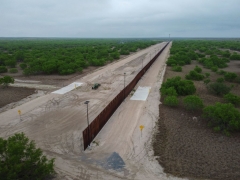 A photo taken on March 30, 2021 shows a general view of an unfinished section of a border wall that former US President Donald Trump tried to build near the southern Texas border city of Roma. (Photo by ED JONES/AFP via Getty Images)

(CNSNews.com) – White House Press Secretary Jen Psaki said Wednesday that construction on the border wall has been paused, but she admitted that there is a review under way of funds allocated by Congress for the wall’s construction that had been diverted from military construction projects.

ABC Chief White House Correspondent Cecelia Vega asked Psaki whether the administration is “restarting some construction on the wall to plug in holes in gaps of areas where construction stopped after the president took office.”

“Wall construction remains paused. There is a review under way, taking a look at the funds that had been allocated when the administration took office as you know, but funds had been diverted from military construction projects and other purposes toward building the wall. That was not something we of course supported,” the press secretary said.

“There are some components of the wall that had already been allocated, the funding to continue building by Congress, so we’re working within what is allowable. Our focus is not-- we don’t believe the wall is an answer. We have never believed the wall is an answer to addressing the challenges, immigration challenges at the border,” Psaki said.

“That’s why we’re proposing an investment in smart-- investments in smart security at the border, why we’re driving what we see as 21st century solutions for border management and why we believe we should build a functioning immigration system. There’s a review under way of kind of where this funding had been allocated and not, but it’s currently paused for the most part,” she said.

President Joe Biden “has said he wouldn’t build one more foot of the wall, but you’re saying some monies could still be used to fill in the gaps on construction on the wall?” Vega asked.

“No, I’m saying that some had been allocated already previously. We’re working within what our limitations are by law, but we believe—we have never believed that putting, building more of a wall – the president doesn’t believe – is a way to address our immigration challenges at the border,” Psaki said.