White House Press Secretary: ‘DOJ Requested That the Search Not Be Made Public in Advance’ 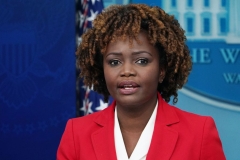 White House Press Secretary Karine Jean-Pierre speaks during the daily press briefing in the Brady Briefing Room of the White House in Washington, DC, on January 20, 2023. (Photo by MANDEL NGAN/AFP via Getty Images)

(CNSNews.com) - The White House knew in advance that the FBI planned to conduct a search on President Biden’s Wilmington, Del., home for more classified documents on Friday, but they were told not to publicize it.

“On Friday when we were here, you were asked about the president going to Rehoboth and if that had anything to do with searches, and you declined to answer that. Did you know Friday there was a search going on at the president’s home?” NBC White House Correspondent Kelly O’Donnell asked on Monday.

“So I’ll say this, and I think I said this on Friday as well. They go to Delaware almost every weekend,” White House Press Secretary Karine Jean-Pierre said.

“We put out guidance last Monday as you know Monday night that they would be spending the weekend at Rehoboth, so it was indeed pre-planned, so just want to put that out there, and I will just mention what was said in the statement on Saturday, which is the DOJ requested that the search not be made public in advance in line with its standard procedures, and we did adhere to that as you can understand,” she said.

“That’s something that we take very seriously, and it was again a request from DOJ for us to make sure that we did not make that public in advance,” the press secretary said.

“Can we anticipate other searches are possible?” O’Donnell asked.

“That part I would definitely refer you to the White House counsel’s office,” Jean-Pierre said.

During Friday’s press briefing, a reporter asked, “The president going to his home in Rehoboth Beach today — does that have anything to do with classified documents being found at Wilmington and none being found at Rehoboth?”

JEAN-PIERRE:  So, as it relates to classified documents, information which the president takes very, very seriously — and you’ve heard him speak to it when he was asked by your colleagues yesterday when he was traveling in California — I would refer you to the White House Counsel Office for any statement coming from here or — or anything — new developments coming from here.

As it relates to his travel, as you know, he often travels to Delaware on the weekends. I just don’t have anything else to share, but anything related to the legal process, I would refer you to the White House Counsel Office.