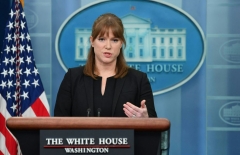 White House Director of Communications Kate Bedingfield speaks during a briefing in the James S. Brady Press Briefing Room of the White House in Washington, DC, on March 29, 2022. (Photo by NICHOLAS KAMM/AFP via Getty Images)

(CNSNews.com) - As many as 18,000 migrants a day could try to cross the southern border once Title 42 is lifted, according to senior DHS officials.

A review of Title 42 by the Centers for Disease Control and Prevention (CDC) must be completed by Wednesday.

When asked whether the Biden administration is prepared for such an influx, White House Communications Director Kate Bedingfield said they are “planning for multiple contingencies.”

“AP is reporting plans by the administration to end Title 42 by May 23. Is the Biden administration prepared to deal with the aftermath of ending Title 42 and the expected influx of migrants?” an Associated Press reporter asked.

“So first what I would say is that this is a decision that we have long deferred to CDC. Title 42 is a public health directive. It is not an immigration or migration enforcement measure. So the decision on when to lift Title 42 we defer to the CDC,” the communications director said.

“That being said, of course we are planning for multiple contingencies, and we have every expectation that when the CDC ultimately decides it’s appropriate to lift Title 42, there will be an influx of people to the border, and so we are doing a lot of work to plan for that contingency,” Bedingfield said.

“I think you saw yesterday the Department of Homeland Security did a briefing, walking through some of the planning that they’re doing to increase efficiency, to ensure that we have the capacity, to ensure that we are operating in a way that is treating migrants humanely, fairly,” she said.

“So you heard from them yesterday on some of the planning that they’re doing more broadly, now not specifically tied to Title 42 or an ultimate decision to lift it, but just more broadly to the work that they’re doing to continue to build up our migration system and ensure that we are restoring order at the border,” Bedingfield added.