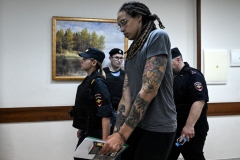 Women's National Basketball Association (WNBA) basketball player Brittney Griner, who was detained at Moscow's Sheremetyevo airport and later charged with illegal possession of cannabis, leaves the courtroom after the court's verdict in Khimki outside Moscow, on August 4, 2022. (Photo by KIRILL KUDRYAVTSEV/AFP v

(CNSNews.com) - WNBA star Brittney Griner was sentenced Thursday to nine years in a Russian prison after being convicted of trying to smuggle cannabis oil in her luggage in February.

“Today’s sentencing is a reminder of what the world already knew. Russia is wrongfully detaining Brittney. She never should have had to endure a trial in the first place. We have repeatedly called for Russia to release her immediately so she can be with her wife, loved ones, friends, and teammates,” White House Press Secretary Karine Jean-Pierre said.

“Under President Biden’s direction, the U.S. government continues to work aggressively, pursuing every avenue to bring home Brittney, Paul Whelan, and every American held hostage and wrongfully detained around the world,” she said.

“As you all know, we have made a substantial offer to bring her and Paul Whelan home. We urge Russia to accept that proposal. I’m not able to share more publicly at this time, but we are willing to take every step necessary to bring home our people as we demonstrated with Trevor Reed, and that’s what we’re going to do here,” the press secretary added.

“I can assure you this is something the president and our national security team are focused on every single day. The president receives regular updates about the status of our negotiations to secure Brittney’s release as well as the release of Paul Whelan and other U.S. nationals who are wrongfully detained or held hostage in Russia and around the world,” Jean-Pierre added.

When asked why the Russian judge gave Griner such a lengthy sentence - one year less than the maximum sentence for such a crime, for what appears to be a minor infraction, John Kirby, coordinator for strategic communications at the National Security Council, said that while he can’t “get inside the head of a Russian judge,” he admitted that “We have seen similar maximum sentences for drug charges of foreigners in Russia.

“Typically, just historically speaking, foreigners that are arrested on drug charges and then convicted under their system tend to get much higher sentences than would be Russian citizens, but I honestly can’t speak to it. It will tell you that as Karine rightly said, she shouldn’t have even been on trial. She’s wrongfully detained. Absent that, we find the sentence reprehensible in its scope,” Kirby said.