White House: Biden ‘Does Not Feel That Children Coming to Our Border … Is a Crisis’ 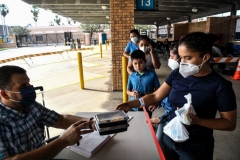 Migrants mostly from Central America get food donated by an NGO Team Brownsville, as they wait for their Covid-19 tests after they are dropped off by the US Customs and Border Protection at a bus station near the Gateway International Bridge, between the cities of Brownsville, Texas, and Matamoros, Mexico, on March 15, 2021 in Brownsville, Texas. (Photo by CHANDAN KHANNA/AFP via Getty Images)

(CNSNews.com) – White House Press Secretary Jen Psaki said Monday that President Joe Biden does not feel that migrant children seeking refuge from violence and economic hardships and coming across the U.S.-Mexico border is a “crisis.”

The president said Saturday that the U.S. will increase the cap on refugees and used the word “crisis” during his remarks to reporters after playing golf at the Wilmington Country Club in Delaware.

“We're gonna increase the numbers. The problem was that the refugee part was working on the crisis that ended up on the border with young people, and we couldn't do two things at once, and now we're going to increase the numbers," he said.
At the White House press briefing on Monday, Psaki was asked about Biden’s weekend remarks calling what’s happening at the border a “crisis.”

“Well, let me first say that we have made some progress — some progress in moving children from out of Border Patrol facilities into shelters.  Nearly 1,000 unaccompanied minors were transferred out of CBP facilities and into the care of Health and Human Services just this weekend.  We are — still have a lot of work to do, but we — that is a step forward, in our view,” the press secretary said.

“The president does not feel that children coming to our border, seeking refuge from violence, economic hardships, and other dire circumstances is a crisis.  He does feel that the crisis in Central America, the dire circumstances that many are fleeing from — that he — that that is a situation we need to spend our time, our effort on, and we need to address it if we’re going to prevent more of an influx of migrants from coming in years to come,” she said.