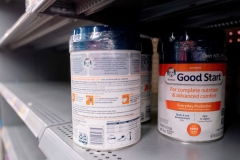 Grocery store shelves where baby formula is typically stocked are nearly empty in Washington, DC, on May 11, 2022. (Photo by STEFANI REYNOLDS/AFP via Getty Images)

“President Biden has directed the administration to work urgently to ensure that infant formula is safe and available for families across the country during the Abbott nutrition voluntary recall. This is work that’s been under way for months,” White House Press Secretary Jen Psaki announced.

“Today President Biden spoke with manufacturers including the CEOs of Walmart, Target, Reckitt and Gerber to call on them to do more to help families purchase formula. He discussed Reckitt and Gerber’s efforts to increase production, which have made up for the loss of production by Abbott, and asked them to identify other ways the administration can help them on top of the actions being announced today,” she said.

“The conversation with the CEOs of Walmart and Target focused on how they are working to stock shelves, including in rural areas, and any regional disparities they are seeing, and the President asked what more his team can do to help move product and get more product to those communities. He also announced additional steps to get infant formula onto store shelves as quickly as possible without compromising safety,” Psaki said.

“These steps include cutting red tape to get more infant formula to store shelves quicker by urging states to provide consumers flexibility on the types of formula they can buy with WIC dollars; calling on the FTC and state attorneys general to crack down on any price gouging or unfair market practices related to sales of infant formula, like third-party sellers reselling formula at steep prices; and increasing the supply of formula through increased exports — imports,” the press secretary said.

About half of infant formula nationwide is purchased by participants using WIC benefits - the  Special Supplemental Nutrition Program for Women, Infants, and Children (WIC), which is administered by the U.S Department of Agriculture (USDA), according to a White House fact sheet.

To this end, the “USDA is urging states to allow WIC recipients to use their WIC benefits on a wider variety of products so that if certain sizes or types of formula are out of stock, they can use their benefits on those that are in stock.”

When asked when parents will be able to get the formula they need and when store shelves will be stocked again, the press secretary said, “Well, I think it’s also important to note that the reason we’re here is because the FDA took a step to ensure that babies were taking safe formula. There were babies who died from taking this formula, so they were doing their jobs.

“That is a good sign, but obviously the steps the president took today are an acknowledgement and a recognition that more needs to be done, that we do not want parents, mothers, families out there to be stressed and worried about feeding their babies,” she said.

Psaki warned that despite the increase in supply that has been seen over the past couple of weeks, people are hoarding formula, “which is an enormous problem.”

“People hoarding because they’re fearful — that is one element of it — and people hoarding because they are trying to profit off of fearful parents. So that is also something we’re focused on taking efforts to track and adjust — and address and look into, but again, more infant formula has been produced in the last four weeks than in the four weeks preceding the recall. We’re taking every step to increase that,” she said.

“And as you mentioned, this obviously stems from the FDA taking necessary steps to try and deal with a very serious problem, and as Josh noted, you know, Abbott says that ‘subject to FDA approval,’ they could restart at this site ‘within two weeks.’ Do you have a sense of why it may be taking so long to get this factory back up and running or what the holdup is from the FDA’s perspective?” a reporter asked.

“I would point you to the FDA, but, again, I’d go back to why this decision was made in the first place, which was to save babies’ lives, and the FDA is not going to approve manufacturing again unless they are certain of the safety,” Psaki said.