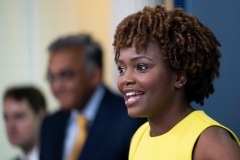 (CNSNews.com) – When asked Thursday what gun laws would have prevented 47 people from being shot in Chicago over the Memorial Day weekend, White House Press Secretary Karine Jean-Pierre cited red flag laws, which allow the police or family members to petition the court to take away guns from someone deemed to be a danger to themselves or others.

“You got Chicago, for example. They already have plenty of very strict gun laws — some of the strictest in the country. Forty-seven people shot there over the Memorial Day weekend. Nine of them died. So, which law would have prevented any of that? Do we think that all these people in Chicago who are shooting each other are legally buying their guns?” Fox News White House Correspondent Peter Doocy asked.

JEAN-PIERRE:  So, here’s — here’s a couple of examples for you. I was just talking about the red-flags law. There are some examples here of how they’ve prevented tragedies. In California, a study showed that a California red-flag law has assisted in the prevention of 21 mass shootings between 2016 and 2018.

So, when enacted, it does help. There are things that we can do, and one of the things that the president talks about with expanding — expanding the background checks, if we’re able to do that, we are going to take more guns out of the hands of criminals, and that is incredibly important.

So, there are things here that can be worked out, that can be done that is not going to prevent every tragedy but will take us to a better place where we can protect our families.

DOOCY:  Okay, and my last one will be: You guys at the White House had some very hard headlines this week about inflation and about baby formula.  If there’s nothing new that you can point to in the speech tonight, did you just schedule it to get people talking about something else?

JEAN-PIERRE:  People have died. People have died in the past couple of weeks, in particular. We had 19 kids die in Uvalde just recently of — a mass shooter came into their classroom and killed them, plus their two teachers.

We had — we had people doing everyday things on a Saturday, like some of us do, go to the grocery store, and 10 of them were murdered. Just last night, in Tulsa, we’re learning of people who were, again, killed.