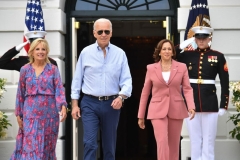 As CNSNews.com reported, the president tested positive for COVID Thursday morning. He had planned to travel to Wilkes-Barre, Pa., to give a speech on gun violence, but had to cancel. Instead, he’s working from the White House residence, the White House said.

“On the vice president, is there a plan in place to transfer power to Vice President Harris if the president gets worse?” a reporter asked at the end of the White House press briefing.

“The president has mild symptoms. He’s able to do the business of the American people from the residence, and that’s what matters right now,” the press secretary said.

“So there’s no plan in place then?” the reporter followed up, but Jean-Pierre left the room without answering.

The White House released a letter from the president’s doctor, saying that Biden was experiencing mild symptoms, including fatigue, a dry cough, and a runny nose, which started Wednesday.

Neither Dr. Kevin O’Connor nor COVID Response Coordinator Dr. Ashish Jha have seen the president in person, because they are following guidance from the Centers for Disease Control and Prevention (CDC) for Biden to isolate and have “minimal contact with the president,” the press secretary said.

“I think, I believe, we believe getting direct information, pretty much detailed information from this letter that we in a transparent way shared with all of you on how he is doing, and we have committed to do that every day,” she said.