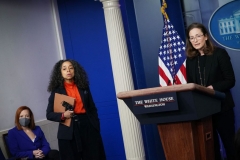 White House Press Secretary Jen Psaki (L) watches as Executive Director of the Gender Policy Council Jennifer Klein (R) and Co-Chair of the Gender Policy Council and Chief of Staff to the First Lady Julissa Reynoso take part in the daily briefing in the Brady Briefing Room of the White House in Washington, DC on March 8, 2021. (Photo by MANDEL NGAN/AFP via Getty Images)

(CNSNews.com) – The White House said Monday that it will consider using federal laws and “the bully pulpit” to challenge local laws banning transgender athletes from competing in women’s sports.

Speaking at the White House press conference, Jennifer Klein, co-chair of the newly formed White House Gender Policy Council, was asked about a laws passed by Mississippi’s legislature banning transgender athletes from participating in girls’ sports and whether the council plans to do anything to address local laws like this.

“We have the tools that we have — which are federal laws, and the bully pulpit, and clarity about our policy and values — and we will be working really closely across the White House, as I said, with the Domestic Policy Council in particular on — and the National Security Council, by the way — on a series of equity issues. So definitely considering that,” Klein said.

Speaking at the White House on International Women’s Day, Julissa Reynoso, co-chair of the newly formed White House Gender Policy Council and chief of staff for first lady Jill Biden, announced that President Joe Biden signed two executive orders “to ensure gender equality and equity throughout the federal government, which is a high priority of the Biden-Harris administration.”

The first executive order will formally establish the Gender Policy Council within the Executive Office of the President with an explicit role in both domestic and foreign policy development.  We know that the full participation of all people, including women and girls, across all aspects of our society is essential to the economic wellbeing, health, and security of our nation and of the world.  This is matter of human rights, justice, and fairness.

The White House Gender Policy Council will be an essential part of the Biden-Harris administration’s plan to ensure we build a more equal and just democracy by aggressively protecting the rights and unique needs of those who experience multiple forms of discrimination, including people of color and lesbian, gay, bisexual, transgender, and queer people.

A year into COVID-19, it is clear that women have been disproportionately impacted by the combined public health crisis, ensuring economic crisis — ensuing economic crisis, and caregiving crisis.  The pandemic has exacerbated barriers that have historically impacted women and girls.

As the country continues to grapple with the pandemic and reckons with the scourge of systemic racism and discrimination, President Biden knows that we need a government-wide focus on uplifting the rights of all women and girls.

The Gender Policy Council will tackle a number of issues.  We will work to combat systemic bias and discrimination, including sexual harassment.  We will focus on increasing economic security and opportunity by addressing the structural barriers of women’s participation in the labor force, decreasing wage and wealth gaps, and addressing the caregiving needs of American families and supporting care workers.

We will ensure access to comprehensive healthcare.  We will strengthen efforts to prevent and respond to gender-based violence, and develop a National Action Plan that establishes a government-wide approach both domestically and globally.  We will promote equity and opportunity in education, leadership, and we’ll work to advance gender equality globally through diplomacy, development, trade, and defense.

Klein explained that the council is required to submit to the president “a government-wide strategy for advancing gender equity and equality in the United States and an annual report to measure progress on implementing that strategy.”

“The strategy will guide the administration’s work to advance domestic and global gender equity and equality, and rights and opportunity for women and girls, and the strategy will evaluate and make recommendations to improve policies and programs, budgets, and data collection across agencies and across the White House, all with a gender lens,” she said.

Klein explained the second executive order that Biden signed on Monday – the Executive Order on Guaranteeing an Educational Environment Free from Discrimination on the Basis of Sex, Including Sexual Orientation or Gender Identity:

The second executive order the president signed this morning focuses on policies — advancing policies to guarantee education free from sexual violence.  The Title IX EO directs the Department of Education to review all of its existing regulations, orders, guidance, and policies to ensure consistency with the Biden-Harris administration’s policy that all students be guaranteed education free from sexual violence.

The order also recognizes that students sometimes experience discrimination based on race, disability, and national origin; and that LGBTQ+ students experience significant amounts.

Finally, the administration also takes seriously the responsibility to ensure that procedures are fair and equitable for all involved.

These two executive order together are a statement of the commitment of the Biden-Harris administration to advancing gender equality and equity.  We are — will be working urgently to ensure that, both here in the United States and globally, gender and gender identity do not predetermine opportunity and outcomes, and that all people, including women and girls and those who face other forms of discrimination, can thrive.