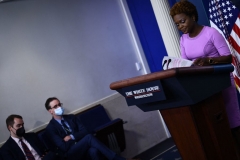 “On a personal note, I’m wearing purple today, and so is some of my teammates, in honor of Domestic Violence Awareness Month, as some of you might know, as well as Spirit Day, which is an opportunity to stand up against LGBTQ+ bullying and harassment. Both of these issues have been made worse by COVID-19,” she said.

“Sadly, domestic violence affects millions of people in the United States. It harms the physical and emotional health of survivors and their families, undermines communities, and is a stain on the conscience of our country. Tragically, 1 in 4 women and 1 in 10 men have experienced sexual violence, physical violence, or stalking by an intimate partner,” Jean-Pierre said.

The administration has also “allocated an additional $550 million of COVID mitigating funding for domestic violence shelters to improve their ability to help survivors during the pandemic.”

“As you all know, the president has said this — that his proudest legislative accomplishment is writing and championing the Violence Against Women Act, which transformed the nation’s response to domestic violence and was passed and then reauthorized three times on a bipartisan basis. Today, he renews his call for the Senate to move swiftly in a bipartisan manner to reauthorize VAWA and strengthen its protections for all survivors,” Jean-Pierre said.

“And on Spirit Day, we recognize that LGBTQI+ youth disproportionately face bullying and harassment. A majority of LGBTQI+ youth in middle or high school were bullied last year. Even more, 70 percent heard homophobic remarks from teachers or school staff, and 75 percent have experienced discrimination based on their sexual orientation or gender identity in their lifetime,” she said.

“This bullying and harassment can have life-threatening consequences, as we all know. More than half of transgender and nonbinary youth have seriously considered suicide in the past. This reinforces the need for the Senate to pass the Equality Act, which will provide long-overdue federal civil rights protections to LGBTQI+ Americans and their families,” Jean-Pierre said.

“You know, a younger staffer recently told me that, in high school, he noticed how many people wore purple on Spirit Day and how much that meant to him as a — as a young closeted teen,” the deputy press secretary said.

“I could only hope that young people who might be watching or sees clips of this briefing will know that they are supported and represented in the highest levels of government today,” she said.

“So today I join people around the world in wearing purple to show solidarity with victims of domestic violence and with lesbian, gay, bisexual, transgender, queer, and intersex youth. Our administration stands with you, we support you, and we love you,” Jean-Pierre said.