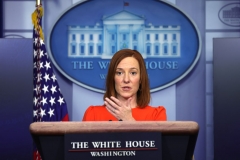 (CNSNews.com) - Senior Advisor to the President Cedric Richmond on Sunday accused Republicans of defunding the police by not voting for the American Rescue Plan.

During an appearance on “Fox News Sunday,” Richmond said, “Let's talk about who defunded the police. When we were in Congress last year trying to pass an emergency rescue plan for cities that were cash-strapped and laying off police, it was the Republicans who objected to it. ... They defunded the police. We funded crime intervention and a whole bunch of other things."

“Some might say that the other party was for defunding the police; I’ll let others say that, but that’s a piece,” Psaki said Wednesday.

PSAKI: The president did mention that the American Rescue Plan - the state and local funding , something that was supported by the president, a lot of Democrats who supported and voted for the bill - could help ensure local cops were kept on the beat in communities across the country. As you know didn’t receive a single Republican vote. That funding has been used to keep cops on the beat.

DOOCY: But at the time that was sold these local police departments might have a pandemic-related budget shortfall, not we need to keep cops on the beat because there’s a crime wave.

PSAKI: I think that any local department would argue that keeping cops on the beat to keep communities safe when they had to, because of budget shortfalls, fire police is something that helped them address crime in their local communities.

DOOCY: The White House’s argument was the American Rescue Plan is going to be $1400 checks. It’s gonna be vaccines, vaccinators. It’s gonna put us on the path to beating the virus, not--

PSAKI: It did those things as well. It was a pretty good bill and piece of legislation.