WH Press Secretary: We Don’t Need to Drill More; We Need to Refine the Oil That’s Out There 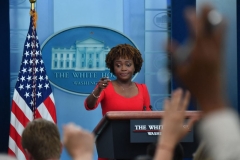 White House Press Secretary Karine Jean-Pierre speaks during the daily briefing in the Brady Briefing Room of the White House in Washington, DC, on June 16, 2022. (Photo by NICHOLAS KAMM/AFP via Getty Images)

(CNSNews.com) - White House Press Secretary Karine Jean-Pierre said Thursday that President Biden doesn’t need to ask U.S. oil companies to drill more. Instead, the Biden administration needs oil refineries to refine “the oil that’s out there” so that capacity can go up and prices can go down.

JEAN-PIERRE: This is where we are. Let me just give you a little bit of a rundown of why we are here and what’s going on, and why we wrote the letter. So due to decreased demand at the start of the pandemic, U.S. oil refineries reduced their capacity by more than 800,000 barrels per day.

Now that consumers’ demand has returned thanks to the president’s recovery plan, oil refineries have still not brought refinery capacity back to the pre-pandemic levels, so that is the problem, and that is what we’re trying to address. At the same time, Putin’s invasion of Ukraine put pressure on global supply, and gas prices have gone up by nearly $2 since before the invasion.

So President Biden has taken historic action to elevate this pressure, releasing record amounts of oil from the Strategic Petroleum Reserve and relying– relaying the world to release oil– that’s at 240 million barrels of oil that he was able to do with his partnership, and so we are now at the highest levels of domestic production, so we actually have crude oil since April 2020 with an additional 9,000 approved drilling permits that remain unused, but refining capacity needs to come back too, so that is what the problem is.

We need them to actually refine the crude oil, which is not happening, and that’s what we’re calling on oil companies to do.

DOOCY: Why not drill more here in the U.S.?

JEAN-PIERRE: Because we don’t need to do that. What we need to do is with the oil that’s out there, we need them to refine that oil so that prices– so that capacity could go up, and then prices, it would go down, would apparently go down.

DOOCY: The president once said he was going to end fossil fuel. Is that now off the table?

JEAN-PIERRE: No, we are going to continue to move forward with our clean energy proposal, the climate change proposal.

DOOCY: Is that the priority - climate change over–

DOOCY: Is the president’s priority lowering gas prices or is it addressing climate change?

JEAN-PIERRE: First of all, it’s– we can do both at the same time. What we’re trying to deal with right now is how do we lower costs for American families, and one of the things we are seeing right now with oil refineries is they are using this moment that there is a war in Ukraine to actually make a profit when there are steps that they can take so that we can actually lower gas prices for families, and so the president has taken action, right? We talked about the Strategic Petroleum that he’s done—

DOOCY: How much has that lowered prices?

JEAN-PIERRE: Here’s the thing, Peter. If we had– if the president had not taken the actions that he’s taken in the past several months, it would not– the prices that we’ve seen now would be a lot worse. It’s actually blunted some of the increase that could have been, and so the president has taken action, and he has been a leader.

Now he’s asking Congress clearly to act in certain ways and also asking for the oil refineries to do their part and not make money off of a time of war. That’s what we’re talking about here.