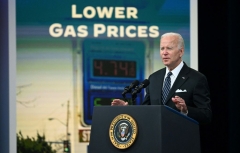 (CNSNews.com) - White House Press Secretary Karine Jean-Pierre said Thursday that President Biden is doing everything he can to bring gas prices down even though he met with CEOs from the off-shore wind industry instead of the CEOs of oil and gas companies.

“The president isn’t really doing everything he can to bring gas prices down, is he?” Fox News White House Correspondent Peter Doocy asked.

JEAN-PIERRE: I feel like there’s a– is there something else to the question?

DOOCY: There’s a lot to the question. For example, you mentioned earlier he’s meeting today with people installing off-shore wind equipment, but not with oil and gas CEOs who are rarely ever in town, but they are today, so how does that help lower gas prices?

JEAN-PIERRE: The president has done a– let me step back for a second. No, no you’re asking me–

DOOCY: But he’s with off-shore wind folks, but not with gas, oil and gas CEOs. How does that lower gas prices? You said he’s done everything in his power. They were a mile away.

JEAN-PIERRE: Peter, you’re asking me a question. May I answer? Okay, here we go. I just want to take us back a second on how we got here, right?. So we have seen gas prices go up by $2 a gallon. One of the reasons we have seen that, the reason we have seen that is because of Russia’s war in Ukraine, and once that happened, once we saw what that impact was going to be, the president took action.

He took action. He made a historic choice to tap the Strategic Petroleum Reserve - 1 million barrels a day - and that was for six months, and that helped blunt the impact of what we’re seeing right now with prices going up, so that matters.

So what we are asking the oil refinery companies to do is to take that production, turn it into, refine that oil so that there is capacity. We are not at capacity right now, and it does matter that the secretary of energy, which is her purview. That is her portfolio to meet with these oil execs, that she does on pretty regular basis.

DOOCY: But your point was about how we got here. The president said as a candidate, no more drilling on federal lands, no more drilling including off-shore, no ability for the oil industry to continue to drill, period. Wouldn’t that– aren’t some of those things that would bring the price of gas down now?

JEAN-PIERRE: Let me tell you how we got here. Since you just said how we got here. Due to a decreased demand at the start of the pandemic, U.S. oil companies reduced production and refinery capacity, which is what I was just saying, Peter. Refiners, for instance, cut their capacity by more than 800,000 barrels per day in the year before the president took office.

At the same time, as I was just stating to you about Putin’s war, Putin’s invasion of Ukraine disrupted the global oil supply, and gas prices have gone up nearly to $2 since the beginning of the year before the invasion. President Biden has taken historic actions again to alleviate the pressure and to blunt the impacts that we have seen because of Putin’s war, and that matters, and that’s what the president is focused on.