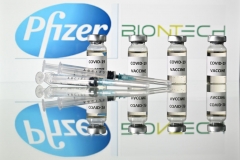 An illustration picture shows vials with Covid-19 Vaccine stickers attached and syringes with the logo of US pharmaceutical company Pfizer and German partner BioNTech, on November 17, 2020. (Photo by JUSTIN TALLIS/AFP via Getty Images)

(CNSNews.com) – White House Press Secretary Kayleigh McEnany is disputing reports that the Trump administration turned down a chance to buy additional coronavirus vaccine from Pfizer beyond the 100 million doses that was contracted and now has to wait until the summer to get more.

In an interview with Fox News’s “Fox and Friends,” McEnany said, “It's just simply not true that they offered extra doses, according to the people who are involved in the negotiations. With each and every company, we contracted for 100 million doses, so it's just simply not the case that we were offered more and rejected them.”

“Two have approached that 94-95% efficacy, but others are on the way, and for this president, no other president has done this. Obama-Biden didn't do this for their bungled swine flu vaccine. President Trump negotiated in advance. This is novel what he did to even have these contracts to manufacture these doses, to have a plan where within 24 hours, every zip code in America will have a vaccine as we go through those most vulnerable,” she said.

When asked whether she’s saying the U.S. will get more vaccines from Pfizer before June or July, the press secretary said, “Absolutely. We've contracted for 100 million doses, so we've already negotiated that in advance, and this plan is laid out, ready for distribution, and contrary to the swine flu vaccination bungle with Obama-Biden, we're ready to go.”

Despite studies showing six in 10 Americans are ready to get vaccinated, McEnany said, “It needs to be higher than that. This is a vaccine that President Trump got us in record time, and it usually takes four to 25 years and President Trump got it in just 10 months, and today among other names you'll be hearing from are Dr. Peter Marx at the FDA.

“[Marx] is a man that goes line-by-line through thousands of lines of data to make sure this is safe and effective and looks at how it interacts with every population in the United States, minority individuals, older individuals, younger,” McEnany said.

“He literally looks at how it comports with each and every American to ensure it is safe, it is effective, and rest assured Moderna and Pfizer are looking like just that and we’re hoping for FDA emergency use authorization in short order,” she added.