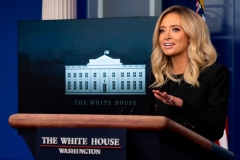 (CNSNews.com) - White House Press Secretary Kayleigh McEnany put House Speaker Nancy Pelosi on blast for her hypocrisy, playing a looped security video at Thursday’s White House press briefing of her getting her hair done inside a San Francisco salon while the rest of the city could only get their hair done outside.

“Two briefings ago, I asked, ‘Where is Nancy Pelosi?’ Today I can announce we have found Nancy Pelosi going into her hair salon. We will be playing the video on loop for all of you to see during the duration of this introduction,” the press secretary said.

“Nancy Pelosi was not in the halls of Congress when I asked where she was. She was not working in good faith to make a deal for the American people. Nope, Nancy Pelosi was found in San Francisco at a hair salon where she was indoors, even though salons in California are not only open for outdoor service,” McEnany said.

“Apparently, the rules do not apply to Nancy Pelosi. She wants small businesses to stay shut down but only reopen for her convenience. Do as I say, not as I do. That's Nancy Pelosi,” the press secretary said.

McEnany accused Pelosi of “holding up $1.3 trillion in relief for the American people, while getting special access to the very kind of small businesses that this money would support, businesses like this hair salon.”

“Before she skipped town to violate her state’s health guidelines, Pelosi proposed a bill. It was called the Heroes Act, which contained no additional paycheck protection funding. This is funding that would help the very small business she has bizarrely accused of plotting against her. The president sees through Democrats’ disregard for Americans in need and he took action unilaterally in his own accord,” she said.

When Congress failed to authorize funding for free lunches for school children for the 2020-2021 school year, Trump and his daughter senior advisor Ivanka Trump “took action and now USDA has extended the summer program which will ensure children continue to have access to free meals through the end of the year,” McEnany said.

As CNSNews.com previously reported, Pelosi called for the salon to apologize, claiming she was “setup.”

“I take responsibility for trusting the word of a neighborhood salon that I’ve been to over the years many times,” she said Wednesday while addressing reporters in the city. “When they said they were able to accommodate people one person at a time, I trusted that.”

“As it turns out – it was a setup,” she added. “So I take responsibility for falling for a setup.”

“Nancy Pelosi is demanding an apology from a single mother and small business owner who has received threats since Nancy Pelosi’s comments against her salon,” McEnany said.

“Salon owner Erica Kious said this: ‘Since this happened, I received nothing but hate text messages, death threats, saying they are going to burn down my hair salon. It's just sad that my community is pulling this, saying that I threw her under the bus when I did not, so that's hurtful. But yes, I think I'm pretty much done now,’” the press secretary said.

“Nancy Pelosi, you ought to apologize to the American people or better yet, come back to Washington and get to work for hard working Americans like this salon owner that you maligned and demanded an apology from,” McEnany added.

On Thursday, Trump tweeted: “Crazy Nancy Pelosi said she was ‘set up’ by the beauty parlor owner when she improperly had the salon opened (and didn’t wear a MASK!). Does anyone want a Speaker of the House who can be so easily SET UP?”

Trump is even encouraging eSalon owner Erica Kious to run for Congress.