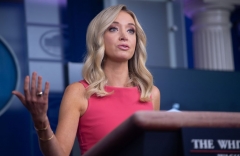 (CNSNews.com) – House Speaker Nancy Pelosi (D-Calif.) and the Democrats have been trying to undermine the U.S. election system for years by allowing illegals on the voting rolls and fighting against signature matching, White House Press Secretary Kayleigh McEnany told “Fox and Friends” on Tuesday.

McEnany was asked whether President Donald Trump talking about how the election is rigged could backfire on Republicans when it come to the Senate run-off elections in Georgia, because voters may think why bother voting.

“No, because the president, again, look, if you go back to when Nancy Pelosi took the gavel, the very first bill she put in place was HR-1. This was allowing people on voting rolls, illegal immigrants on voting rolls, no signature matching. Democrats for years, far before the 2016 election, the 2020 election, rather, have tried to make our election system less secure,” McEnany said.

“The president is going to continue to fight for that while also saying it's important to turn out and vote while also perfecting the system,” she said.
The press secretary pointed out that Trump “has been unapologetic for the last 10 months in saying that mail in voting, mass mail-in voting is subject to fraud.”

“This has been a key part of what he has talked about when it comes to election integrity. He wants to make sure signatures are matched, the mail-in voting is sacrosanct and is treated with the integrity that every American vote deserves, that it’s actually encapsulating the vote of the American people,” she said.

As CNSNews.com previously reported, McEnany criticized the Washington Post for reporting that former Vice President Joe Biden’s decision to have all women fill the top communication roles at the White House marks the first time that the entire senior White House communications team will be entirely female.

McEnany pointed out that Trump has appointed females to every senior role in the White House and appointed the first working mother as press secretary when Sarah Huckabee Sanders held the position.

“Every senior role in the White House is a female. This president, out of the five press secretaries that have been women, three of them have been under President Trump. He appointed the first working mom in Sarah Huckabee Sanders, then appointed another working mom, then appointed me with a newborn under the age of 1,” she said.

“He’s consistently empowered women, but the double standard in the media is absolutely absurd. If you’re a Democrat woman who comes into the West Wing behind me, who takes that podium, your biggest concern outside of your official duties is the next glowing profile written about you,” the press secretary said.

“If you’re a female woman in the Republican party who takes that podium, guess what your worry is? Having a Playboy reporter shout questions at you, demeaning misogynistic questions during a briefing. It's a double standard. It’s one that's ridiculous and one that the White House Correspondents Association should look into when you have playboy reporters shouting at women in a misogynistic manner simply because they’re a member of the GOP,” McEnany said, referring to White House Correspondent for Playboy Brian Karem.