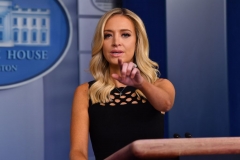 (CNSNews.com) - White House Press Secretary Kayleigh McEnany said Thursday that the Trump administration’s decision to have data on coronavirus cases sent directly to the Department of Health and Human Services instead of to the Centers for Disease Control and Prevention has nothing to do with reports of possible manipulation of data coming out of Florida and certain states.

Instead, she said it was to ensure daily reporting of COVID data from hospitals to White House Coronavirus Task Force Response Coordinator Dr. Deborah Birx and HHS Secretary Alex Azar. Under the old reporting system, about 80 percent of hospitals had been reporting data, and the rest were not.

The secretary said that the new system ensures that 100 percent of hospitals report data on daily admissions, intensive care unit usage, and personal protective equipment (PPE) usage directly to HHS. That data is also considered open source, so the CDC and the public can access it.

“No, the intent for this decision, and I talked extensively today with Dr. Birx, with Secretary Azar, and with [CDC Director] Dr.[Robert] Redfield about this,” McEnany said.

“The intent of this is we need to make sure that there is daily data that is being given to Dr. Birx and others who are running point on a lot of our actions with Remdesevir and identifying hot spots, and I would point out, and I just want to explain this, because there has been some confusion in the press,” the press secretary said.

McEnany explained the difference between the two methods of data collection.

We need 100% of hospitals reporting data, because it is critical that Dr. Birx and others receive the daily admissions, ICU use and PPE numbers, and when you are only getting 81% of hospital data, that means that you've got 19% of hospitals that were unaware of their needs.

So what happened is we also have a second method of tracking this data, and it is the Teletracker database, and this is an HHS system, and this was initially used for purposes of provider relief funding.

We asked hospitals to tell us about their COVID admissions, so that we could identify possible hot spots, and as it turned out, this data ended up being more complete, more up to date with information, and so ensuring that hospitals are reporting it to this system where we are getting more complete data was the reason that HHS has had this transition, where they’ve asked hospitals to transition reporting to the Teletracker system.

McEnany said that “It’s important especially with Remdesivir distribution that we know exactly where the needs are so we can surge them.”

The press secretary said that she confirmed with the CDC director that the new system “is completely open source data available to the CDC.”

“Secretary Azar says we insist that they use it, and no one - and Dr. Redfield confirmed this - no one is taking data away from the CDC, and that data is routinely published so that the American people are fully informed,” she said.

McEnany stressed that the CDC COVID database will continue to be public.

“The CDC database is the public data that has been out there. It will continue to be public. It should be public, and this is all about getting more data out there, not less data and ensuring in particular, that our doctors get the daily data, and one thing that I would also like to point out for everyone, just with regards to testing,” the press secretary said.

She also noted that the Obama administration stopped testing and counting cases of H1N1 in the middle of the pandemic, according to former Vice President Joe Biden’s former Chief of Staff Joe Klain.

McEnany explained Thursday that Klain called it “pure fortuity” that the H!N1 flu, which affected mostly younger people, didn’t become “one of the great mass casualty events in American history.”

“It was actually CBS reporting that in 2009, under Obama-Biden - and this is CBS reporting - ‘the CDC abruptly advised states to stop testing for H1N1 flu and stop counting individual cases,’” the press secretary said.

“So while this president surged testing, under the Obama administration, they stopped testing entirely, and Ron Klain, vice president Biden's former chief of staff said this. ‘It was purely a fortuity that H1N1 isn’t one of the great mass casualty events in American history. It had nothing to do with us doing anything right.’ This is former VP Biden’s former chief of staff. ‘It just had to do with luck,’” she said.

“Contrary to that, this president led the world in testing, led the world in ventilators, redistributing ventilators, four therapeutics, 13 vaccine candidates, one going into phase three clinical trials? This response has been extraordinary and historic. We didn’t pause testing. The Obama-Biden administration did, and that was a shameful decision,” McEnany said.